What’s this, a Christmas Eve post full of fine things you might enjoy? It’s a Christmas miracle! And this time, it’s all about comics – my favourite ones of this year. 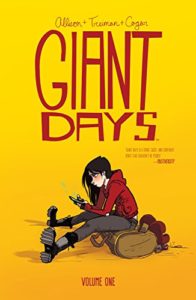 Fifteen years ago, I had a dull admin job for a small office of a vast multinational construction firm. I was the only admin in the office and could get through the work at speeds that dazzled my employers, thanks to the poor quality of their previous admins. This left me with a lot of time to kill. I disappeared down a rabbit hole of webcomics, where I stumbled across the work of John Allison. I binged my way through Bobbins and Scary Go Round, which at the time was his main ongoing project. It was a discovery that warped my sense of humour forever.

Allison’s biggest current creation is Giant Days, made in collaboration with artists Lissa Treiman, Max Sarin, and Julia Madrigal, with inks from Liz Fleming, lettering by Jim Campbell, and colour from Whitney Cogar. It’s a comedy-drama about a group of friends studying at Sheffield University, where they face the challenges of study, romance, friendship, and trying to work out how to be an adult human being.

Giant Days is a wonderful book. Its stories are full of whimsy, its characters full of heart, its dialogue full of odd British humour. Allison’s tendency towards fantasy is almost entirely reined in in favour of slice-of-life storytelling, but the offbeat tone of his Tackleford stories remains. The art is uniformly vibrant and characterful, the ongoing story well balanced against the self-contained arcs of each issue, and I find myself utterly absorbed in these characters and their lives. A humour book about students might not sound like anything special, but I re-read every issue at least twice in the first week, bathing in its warmth and whimsy. 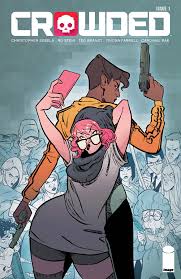 Thought Bubble, the annual comics convention in Leeds, is a dangerous place. So many creators, so many comics, so much temptation to buy it all. This year, I was relatively restrained, but I’m very glad that I gave in to temptation and bought the first issue of Crowded.

Crowded is set in the very near future. There’s a crowdfunding platform for assassins, an app to hire bodyguards, and celebrity streamers turning death into entertainment for their subscribers. When Charlie Ellison becomes the target of the biggest ever crowd-funded killing, she hires the only bodyguard she can get – the poorly rated yet incredibly competent Vita. If they can stay alive for thirty days then the hunt for Charlie will end. But Charlie’s a narcissist with the attention span of a goldfish and no understanding of the word “consequences”. Staying out of trouble is going to be tough.

Crowded is written by Christopher Sebela, with pencils by Ro Stein, inks by Ted Brandt, colours by Triona Farrell, and letters by Cardinal Rae. It’s a darkly funny thrill ride that takes satirical jabs at modern culture without letting up on its tense storytelling. As the issues progress, the characters are revealing their depths, raising questions about who they are and how they got to this place in life. Even Trotter, the celebrity streamer using Charlie to maintain his channel’s upward momentum, has developed in five issues from a one-note caricature to a troubled man struggling to cope with his own monstrous persona.

This is as close to Transmetropolitan as I’ve read in years, and that’s very high praise.

The Wicked + The Divine 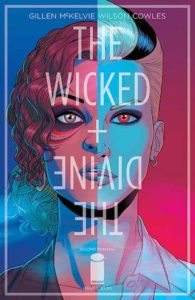 As it heads into its final year, the latest masterpiece from writer Kieron Gillen and artist Jamie McKelvie goes from strength to strength. This is one of those creative pairings that always leads to something wonderful, as shown in Phonogram and Young Avengers. This latest series, with colours from Matt Wilson and letters by Clayton Cowles, might be their strongest yet.

Every ninety years, twelve gods return in the bodies of young people. They live brief, glorious lives, only to burn out within two years. This time, they’re pop stars, their magic channeled through their music. They are stalked, studied, adored, and sometimes hated. They are the embodiment of fame.

The Wicked + The Divine is a fascinating exploration of celebrity culture and the power of music. Where Phonogram gave magical power to the audience, WicDiv gives it to the artists, creating a very different dynamic. Given Gillen’s background in music journalism, there’s a lot here that’s clearly personal, but that doesn’t turn it into something maudlin or shoe-gazing. This year’s comics have revealed the dark secrets behind the pantheon, dragging the story ever deeper into tragedy while letting a glimmer of hope still shine. It’s nearly finished, so if you don’t like to risk a story that might never end, you’re in safe hands here.

Gillen and McKelvie like to experiment from time to time, and that’s resulted in some unusual issues. I won’t spoil the surprises, but it’s great to see a creative team pushing the boundaries of the medium while maintaining the momentum of their story. This is a comic we’ll be talking about for decades to come.

There you have it – my top comics picks this year. If you haven’t read them yet, I hope you give at least one of them a try. Now I’m off to indulge in mince pies, mulled wine, and all the other festive treats.