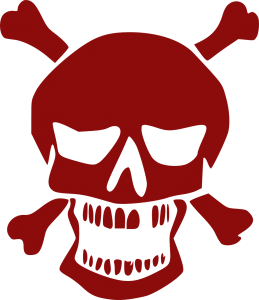 The dread ship Gribbleskull creaked as it ploughed through the waves, every inch of deck covered with members of its goblin crew. Toadbits, the navigator, was having a nose-picking competition with a gunner called Shivs to decide who would lead the boarding party. At the forecastle, crewmen were gathering their ramshackle collection of rusty cutlasses and second-hand pistols.

Captain Sloshboggle had never been prouder in her brief, filthy life.

“There they are!” she screeched, pointing in excitement at the elven treasure barge, with its crisp white sails and delicately painted hull. Other pirate ships were closing in – dwarfs and orcs, humans and ogres, all eager for their share of the loot. It would be a profitable day.

A set of signal flags rose on the lead pirate ship, Admiral Ironskull’s Sylph Splitter. Sloshboggle peered through the cracked lens of her telescope, expecting orders for the battle.

“Call that a ship, goblin?” the signal read. “You couldn’t sink a fishing boat.”

Sloshboggle slammed her fist against the rail in frustration. Weakened by woodworm, it crumbled apart. Half the lens fell out of her telescope, hitting the deck with a clink.

“We’ll show them,” she cried out. “Juddersponge, stoke the fires and start up the paddle wheels.”

“Aye aye, cap’n.” A group of soot-stained goblins picked up shovels and opened a metal hatch beneath the aft-castle. Hot air and smoke bellowed out, flapping the sails even as they turned them grey. Then the shovellers started hurling coal down the gap. The ship shook, sending one of the crew tumbling overboard.

Sloshboggle pulled a lever. Two vast paddle wheels, stolen off water mills and bolted onto the sides of the ship, started to turn. The whole crew cheered as the water churned.

For a moment, they started to catch up on the other pirates. Then there was a groan, a creak, and one of the wheels fell off, hitting the water with an almighty splash. Even as Sloshboggle reached for the off lever, the ship started to turn around itself in a small circle.

The laughter from the other ships was so loud they could hear it above the roar of the furnace.

“That’s it!” Sloshboggle yelled. “No more Captain Nice Pirate. Fire up the Raminator!””

“But cap’n,” Juddersponge said, red eyes wide with fear, “the Raminator’s only built for short bursts. If we try to use it to get all the way there-”

“Aye, cap’n,” he exclaimed, and the rest joined in.

More coal poured down the chute, flames belching out before they slammed the hatch shut. The deck trembling beneath her feet, Sloshboggle waited for the paddle wheel to turn them full circle, so that they pointed at the elven barge.

Awed silence fell across the goblins as she reached for the Big Red Lever.

“Raminator,” they whispered in unison.

She pulled the lever.

The first noise was a splintering thud, as a twelve-foot metal spike burst from the prow. Then there was a splash as the back of the rear-castle fell away, revealing the a row of tubes. Finally came the roar as flames burst from those tubes.

Waves parted as the Gribbleskull swept forward, faster with each passing moment. Her hands on the wheel, Sloshboggle fought to keep them on course as the ship bucked and rolled across the sea, the uneven power of the Raminator threatening to tip them into the depths.

Faster and faster they went, and Sloshboggle began to realise the problem with the Raminator – until they hit something, there would be no stopping them.

But wasn’t that the point?

The wind snatched at Sloshboggle’s battered tricorn hat. She grinned excitedly, drool whipping back from the corner of her mouth. Her crew looked just as exhilarated – eyes wide, teeth bared, weapons clutched in warty hands.

They passed the human ship and then the orc one. Billowing smoke made Sloshboggle look back for a moment, and she saw that the rear of the ship was on fire. But who cared when they were about to prove that goblins were best?

The Sylph Splitter was just approaching the treasure barge, her bearded crew preparing to board. The Gribbleskull shot past in flames, goblins whooping wildly and gesticulating obscenely at the dwarfs.

There was an almighty crash as they hit the treasure barge, smashing its perfectly painted hull to smithereens. The slender mainmast tumbled. Dozens of elves fell overboard, all their grace and beauty unable to save them.

From stern to prow, the goblins cheered and danced victory dances. Some leapt onto the elven barge, only to come hurrying back as they realised that it was sinking.

“You idiots!” Admiral Ironskull bellowed from his ship. “All that treasure! You’ve lost all our gold!”

“Who can’t sink a fishing boat now?” Sloshboggle shouted back, to cheers from her crew.

“Now…” Sloshboggle looked from her burning ship to the sinking elven one, then to the crew of scowling dwarfs sailing away from them. “I hadn’t thought about that.” She grinned. “Now we build a bigger Raminator!”

Thanks to Rachael for the inspiration for this story. I hope you have fun with your own goblin steampunk pirate adventures.

If you enjoyed this and would like to read more of my stories then please consider signing up to my mailing list. You’ll get a free e-book and short stories straight to your inbox every Friday.