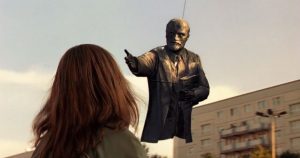 On the surface, the 2003 film Good Bye, Lenin! seems like a simple piece of absurdity. During the late days of the Cold War, East German Christiane falls into a coma, only to awake after the fall of the Berlin Wall. Her son Alex, believing that the shock of the fall of communism will kill her, decides to hide the truth. He creates a fiction around her, an imaginary Germany in which communism has triumphed. To protect his mother, he reinvents history. So far, so ridiculous.

But as I watched the film, I was struck by the commentary this offers on real history. History isn’t a straightforward view of reality. It’s something we create with a purpose. Part of that purpose is to understand the past, but we usually have other motives too. Whether we’re seeking entertainment, making a political argument, or trying to keep mum from slipping back into a coma, our reasons for exploring history give it form. Most of the time, we don’t deliberately try to deceive, but our motives and interests filter what we see. If you want to be entertained, you see the action and daring of war, not the civilian casualties. If you want to prove that Britain is a standalone powerhouse, you see the British RAF and not the Eastern European pilots who were part of its squadrons in the Second World War.

Like Alex, we create a history that suits us.

Sure, some people are more blatant about this than others. The way Donald Trump constantly reinvents the recent past, starkly filtering out his own inconvenient statements, is particularly glaring.  But there’s a spectrum of behaviour here, from Alex’s deliberate deception to Trump’s narcissistic denial to more mundane bias.

I know I bang on about this a lot, but history isn’t a window into the past. It’s our relationship with it. Like Alex, we can go to extraordinary lengths to see the past we want to see. But unlike him, we’re seldom aware of the deceptions we create. And sometimes, other people’s deceptions catch up with us.

Try to remember that, next time you cite history to make a point. How far has your purpose shaped what you’re seeing? And what have you left out in the rush to see a history that suits you?