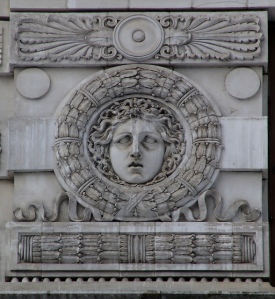 “You said there’d only be one gorgon!” Myrrine yelled as she fled down the torch lit tunnel, sandals slapping against the cold stone. Behind her, the sound of many slithering bodies pursued them through the darkness.

“That’s what Herodotus told me.” Korinna’s armour glinted in the flickering light, mirrored shield flashing as the Amazon glanced back over her shoulder. A bag slapped against her leg, blood seeping from the severed head inside, a single strand of snake hair flapping about as it poked out the top. “Useless bloody historians.”

They rounded the corner and saw Ampelios scratching his head as he tried to remember which of two tunnels they’d come down an hour before. The Spartan had the muscles of a bull, but sadly the brains to match.

“Go left!” Korinna yelled just as Ampelios headed down the right-hand tunnel. “No! That’s the-“

There was a sharp snap and a bellow of pain. Ampelios staggered back out of the tunnel, blood spurting from what remained of his left leg.

Ampelios fell to the floor, staring up at Myrrine as she rushed to his side.

“Good thing we brought a physician, eh?” he said.

“Good thing indeed.” Myrrine clamped Ampelios’s hands around the wound, getting him to staunch the blood flow as best he could. Any other man would have passed out by now, but then this was the way with Spartans. “We need to close this fast or you’ll die of blood loss.”

She rummaged in her bag, looked up in frustration.

“Where are my bandages?” she asked.

“Used them to make the gorgon net,” Korinna replied, looking anxiously back down the tunnel.

“What about my Vesuvian iron?” Myrrine asked. “It’s enchanted to cauterise wounds.”

“Black rock the size of my fist?” Ampelios asked.

“Threw it at the gorgon.”

Myrrine screamed. It wasn’t as cathartic as she’d hoped.

“Why in Hades did you bring me,” she said, panic making her voice rise, “if you weren’t going to let me keep my tools?”

“Turned to stone?” Myrrine exclaimed. “I don’t know how to turn someone back from stone!”

“What sort of doctor are you?”

“The stupid sort, if I ever work with you again.”

Ampelios was starting to look pale, his fingers loosening around the stump, letting out even more blood.

The slithering of pursuit grew louder. Something flickered down the tunnel.

“We have to move.” Korinna dragged Ampelios to his feet, thrust him towards Myrrine. “You help him run.”

“But he’s twice my size!” Myrrine staggered beneath his weight, blood starting to soak the bottom of her toga.

“Then you’ll have to run quickly.” Korinna shoved them towards the left hand tunnel, holding her shield up the way they had come. A moment later she turned and dashed after them. One of her feet clattered heavily against the ground.

Glancing back, she saw that one of Korinna’s feet had turned stiff and grey, and the warrior was grimacing as she ran.

“Foot’s stone,” Korinna said. “Must have just caught me with the gaze.”

“I didn’t think that was how-”

“Well it is,” Korinna snapped. “Now keep running, or Ampelios won’t be the only one dying.”

They ran on up the tunnels, but the one-legged Ampelios was slowing them down, the more so because he was bent over, futilely trying to stem the bleeding. Myrrine glanced from him to Korinna. Inspiration struck. It was a desperate, probably futile sort of inspiration, but it was all she had.

“Oh yes,” Korinna snapped. “Let’s turn someone else to stone, maybe lose the head too and miss out on the bounty.”

Myrrine could hardly fight Korinna for what she needed, and she could still hear the gorgons approaching. In desperation she swung around, hurling Ampelios at the Amazon. Korinna’s sword clattered to the ground as she grabbed him with both hands.

Desperation lending her speed, Myrrine snatched up the sword and sliced open the bottom of the bag. She grabbed the gorgon’s head as it fell out, averting its gaze before it could hit her, then directing it onto Ampelios’s ruined leg. The air tingled with power, and the stump stopped bleeding as it turned stone grey. He pulled his hands from it and stood up straight, leaning on the more secure support of Korinna.

Myrrine thrust the head into her empty medical bag. At least that was good for something.

This story was inspired by a conversation in a comment thread with H. Anthe Davis – I know this isn’t exactly a fantasy medical drama, but it’s a start, so thanks for the inspiration H.

If you enjoyed this you might also like my other Flash Friday stories, a growing collection of very short fiction. And for more fantasy stories, check out my ebook By Sword, Stave or Stylus.