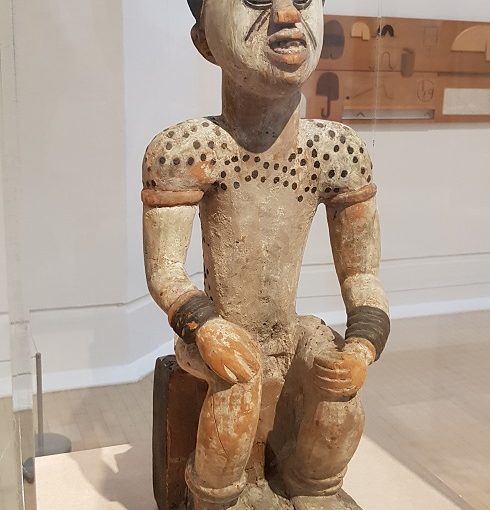 Tohan crept into the grave wood, a basket of woven reeds strapped to his back, a thief in the most sacred of places. He hated coming here. Memories poured out of the shadows – images of Oela’s body, pale and wrapped in silk; of the mourners carrying her to her grave; of the goods laid with her and the dirt tumbling after, hiding her from him forever. He had shed tears enough to fill a lagoon. Yet here he was again, set on the most wretched of tasks.

A figure loomed out of the trees, the first of the grave guardians. The statue’s wooden face had been worn smooth by the centuries, the features of the woman it protected obliterated by time. Only the eyes still had colour, a green that glowed in the darkness, a reminder that there was life after the body passed.

Tohan sidestepped around the guardian’s field of vision. With a creak of old wood, its head turned and he held his breath, then realised that he was standing on the grave it guarded. Another step and the movement stopped.

Tohan exhaled and walked on.

Deeper into the grave wood, his way became crowded with guardians. The oldest of the statues had been carved from living wood and the bodies they represented laid amid the roots. More recent guardians were carved in the town and brought here, to take a place wherever one could be found, to take up their eternal vigil.

He tried to tread a line between the graves, but they were packed tight together and his feet were those of a potter, not a dancer. Several times he stumbled, trod on sacred dirt, and saw the statues turn to face him. Every time, his heart raced and he quickened his step, afraid that if he stayed long enough at one grave then its guardian would turn on him.

At last he reached the place he sought. The grave was new, the paint on the guard clean and bold. Yellow skin, green eyes, black hair. Traces of gold embedded as jewellery around the neck.

There was a treasure buried here, its value beyond counting.

He knelt and drew a trowel from the basket on his back. With trembling hands, he dug into the loose dirt.

There was a creak.

The statue bowed its head to look down at Tohan.

He dug faster, using his hand as well as the trowel, casting aside great clods of earth. His chest felt tight, his muscles tense as bowstrings.

“Come on, come on…” he muttered as the dirt flew.

Another creak. The guard’s arms swung around.

If he wanted to stay free then he should back away now, abandon his prize and the statue guarding it. But he couldn’t. Not now. Not ever.

He scrabbled frantically in the dirt. A nail tore loose but he barely noticed the pain.

“Please,” Tohan mumbled, thrusting his hands deeper, feeling desperately for the thing he sought. “Please, I need this.”

He felt damp silk and the cold, unyielding flesh of the fresh corpse. His fingers brushed a leather cord.

“Criminal,” the guard intoned as it tightened its grip and pulled.

The magic of the grave wood was far stronger than Tohan. He was dragged up. He tightened his fingers around the cord, which resisted for a moment and then came.

“Robber!” the guard said, louder this time. Soon, people from the town would hear. They would find him, judge him, know his weakness.

He held up the cord and saw the pendant hanging there, a clay model of a boat, its blue enamel chipped. The first gift he had made for Oela, one she had worn every day since, right into the grave.

“Please,” Tohan whimpered. “I need something of hers. Some token to remember her by. Something to tell me that I’m not alone.”

He looked up into that face, carved with Oela’s long nose, her narrow brow, her broad smile. In place of her eyes, those shining green points, strange and yet familiar. His tears ran until they fell onto the wooden arms that gripped him so tight.

It lowered Tohan to the ground and let go. Painted hands shovelled dirt back into the grave, but made no attempt to take the pendant.

He stumbled back a step, one hand rubbing at his eyes, the other clutching his precious treasure. Then he turned and walked away through the grave wood.

The guards watched him every step of the way.