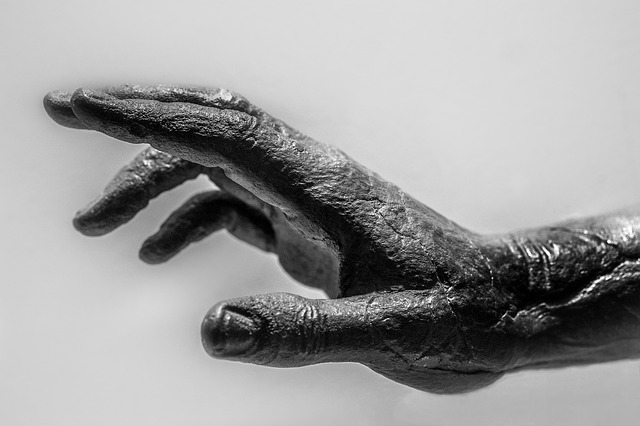 The steam shovel shook in Fong Liling’s hands as she pressed it against the earth. Dirt flew back in great clumps, past the pneumatic power tube and the coal-fired engine, onto a carefully positioned spoil heap. There, her students would sift through it all, looking for shards of pottery and ancient coins, evidence of the people who had built this barrow. As excavator, she was after something more.

This would all have been easier if the locals weren’t such a superstitious bunch and she could have paid them to do the digging instead of importing this ridiculous machine. But no, they had to keep away from the ancient grave sites, didn’t dare disturb the angry spirits they were sure lived there.

Just thinking about it made Liling roll her eyes.

There was a clang as the spade hit something solid. switched off the power, pushed her goggles up her forehead, and peered into the dirt.

A curved brass plate caught the sunlight streaming through the trees.

Grab your trowels!” shouted to her students. “We’ve got one.”

By they had unearthed the whole statue. It was the figure of a warrior, clad in a torc and carrying a club, the whole thing made of interlocking metal plates. A winding key protruded from the back, just like in the ancient books Liling had found.

“Perfect,” she whispered as her students strained to get the statue upright.

With a trembling hand, Liling turned the key. She felt the resistance of the spring inside, heard the clunk of gears.

The statue raised a hand, looked at her, then looked at the grave mound.

“We’ve come to free you from the dirt,” Liling said. “To give you the attention you deserve, you marvel.”

She reached up to brush dirt from the statue’s head.

“Come, this way,” she said, pointing in the direction of their camp.

The statue turned, knelt, and started digging into the dirt they had just rescued it from.

“I think it’s trying to bury itself,” another replied.

“No need for that,” Liling said. “Whatever your original creators told you, you are too beautiful to stay hidden in the dark. Let us take you back to .”

The statue kept digging. It was hip deep in loose soil and still going down into the side of the barrow.

“Well done, you can dig,” Liling said, grabbing the statue’s shoulder and trying to turn it around. “Now come dig in a museum.”

The machine shook her off and kept digging.

“You are mine and you will come with me!”

grabbed the statue around the middle and started dragging it back, its heels leaving scars in the ground.

The statue around its waist, wrapped an arm around , and lifted her off her feet, clamping her against its chest.

“Stop that!” she screeched. “Stop that this instant!”

The statue strode back into its hole and started digging with its free hand. Dirt tumbled around them as the hole threatened to collapse on . There was dirt in her hair, dirt down her shirt, dirt in her mouth as she opened it to protest.

“Help me!” she shouted. “This thing has gone mad.”

Her students rushed forward. Some tried to grapple with the machine while others tugged at Liling’s legs, almost pulling down her trousers. The edges of metal plates scraped against her chest as she was dragged free and fell in a tousled mess in the dirt.

“This is not funny,” she snapped, seeing the looks on some of her student’s faces.

She looked up at the machine. It kept digging but turned its head to look at her. A single brass eyebrow pivoted up and then back down.

“Fine, you’ve made your point.” stood and brushed off the dirt. “You can stay in your filthy hole. I’m sure there are other sites we could be digging.”

One of the students frowned.

“What will we tell the university?” he asked.

considered her options, wondering which would leave her with the most dignity.

“We will tell them that this place was haunted,” she said.