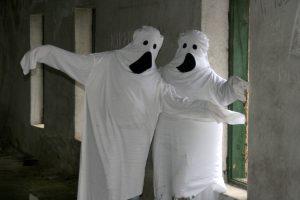 Without distractions, Halloween would just have been the first anniversary of my death, a time for some mopey haunting. But I was determined not to let it get to me. The guys had accepted my ongoing presence in the house – I even had my own room still – and that meant I got to attend the annual party.

The first problem came when I tried to put on my costume. I hadn’t bothered changing clothes since I died – ghost shirts don’t get sweaty or stained. I gathered all the ghostly substance I could and pulled on an old polar bear outfit I’d worn for a fun run.

Grinning, I looked at the foggy figure of myself in the mirror. But the instant I stopped focusing on holding it up, the costume fell through me, dropping in a disheartening heap on the floor.

I wasn’t going to let this get me down. Tonight was my night. Walking through the door, I left my abandoned costume and headed down to join the party.

There was already a small crowd around my favourite party tradition, punch bowl apple bobbing. Friends greeted me enthusiastically, and Little Dave waved me forward.

To cheers and shouts of “Apple chug!” I leaned forward and plunged my open mouth at the nearest fruit.

The apple bobbed up through my ghostly head, to a mix of groans and laughter. Hiding my disappointment, I forced a grin and mugged for the crowd, then hurried away.

“You’re cute,” a drunk blonde said, staggering up to me as I stared at the drinks table. “But what’s up with your skin?”

She leaned forward, trying to lean on me as she reached for my cheek, and fell through me to the floor.

This time even I laughed. What’s not funny about drunks falling over? Give it a few hours and I could be one of them.

It was time to accept my place and roll with it.

“Here, man.” My housemate Rob held out a glass of tequila. “Let’s celebrate the day of the dead!”

Carefully focusing, I took the glass between my fingers, raised it to my lips and tipped it back.

For the briefest moment I tasted the gloriously fiery flavour of the drink. Then it fell through me, creating an embarrassing damp patch on the carpet.

“Next!” Rob, oblivious to what had happened, started pouring me another.

“No, thanks,” I muttered, slumping as I walked away, feeling more excluded than ever.

The front door was open, but that didn’t stop a group of trick-or-treaters ringing the bell. Out of years of habit, I reached for the candy bowl, only for my hand to pass through it and the table below.

I turned to see half-a-dozen ten-year-olds in costumes from cartoons, all staring slack-jawed at me.

“That was awesome,” one of them whispered, wide-eyed.

“Arrrghhh!” screamed another, and the rest joined in.

As they ran off into the night, I finally managed a genuine smile. Easing myself back into the wall, I got ready to spring out on the next group of visitors. Maybe there was a place for me in Halloween after all.

I reached for a can of beer someone had left on the hall table. It slid through my hand.

It’s Halloween weekend, the time of year when things get spoooooky…. Or just costumed and over-excited on sugar. Either way, time for a seasonal story.

And if you want something genuinely creepy, you can find my medieval horror story ‘Cold Flesh’ in the recently released 9Tales Told in the Dark 18. When a revolt fails, men get hanged. But does that mean that they’re gone for good? 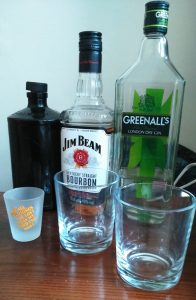