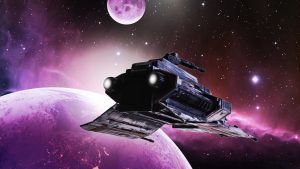 The Star Runner turned as I tilted the controls to port, edging us into a thinner area of the asteroid field. The grip of the yoke was well-worn, a perfect fit for my hands. A lucky charm in an area most spacefarers considered cursed. So many ships had been lost here down the years, from human freight haulers like our own to the exploration pods of alien civilisations. Everybody kept coming because of the riches in these rocks, but few relished the journey.

Rappoport, the cargo master, ducked beneath the low doorway from the crew quarters and joined me on the bridge.

“Captain, there are ghosts,” she said.

I flicked my eyes away from the holobox showing our position in space. Rappoport was white as a sheet and her hand trembled as she placed it on my shoulder.

I hated to be touched and Rappoport knew it. Whatever was affecting her must be extreme.

“Are you back off the waggon?” I asked, holding back the snap of anger.

“No, captain.” She looked shocked at the suggestion. “There are ghosts. Spirits of those who’ve died out here. I’ve seen then. So have Angelo and Dover. Everyone’s unhappy.”

I flipped a switch, turning on the autopilot and a dozen different proximity sensors. Our course would be less efficient without me shaving it short by running close to the rocks, but this would at least keep us safe while I dealt with the crew.

All dozen of them, from the navigator down to the handyman, were waiting for me in the rec room.

“There’s no such thing as ghosts,” I said. “Get back to your stations.”

“No, captain.” Angelo, the tubby little mechanic, folded his arms and stared nervously at me. “We want to turn back.”

“Everybody knows this place is cursed.” Dover pushed herself away from the wall, slipping into the fighter’s stance she took when on edge. “We ain’t going no further.”

Murmurs of agreement told me how close they were to mutiny. My own crew. Disgusting behaviour, but I’d lecture them on that later. For now, I needed a way forward that kept crew and ship heading towards our cargo’s destination.

“Tell you what,” I said. “Show me these ghosts and I’ll turn us around. But if you can’t – if you’re all high or dreaming – then there’ll be hell to pay.”

They led me into the creaking corridors connecting the cargo containers. We didn’t suit up – the lower shielding here wouldn’t matter as long as we didn’t linger too long. I had no intention of lingering at all.

I froze. A pale figure hung in the air in front of me. Indistinct as it was, it reached out a hand, pointing off to the left, and let out a terrible wail.

My blood froze. Was I losing my mind, or was this really a ghost? I trembled, dreading either thought.

The apparition flickered, and for a moment it became clearer. It was no human – the eyes were too large, the hands three-fingered. As I watched, my skin growing cold, the ghost slowly turned, pointing at something we were leaving behind.

Heart hammering in my chest, aware of the gazes of my crew boring into me, I forced myself to take a step forward and then another, until the apparition was close enough to touch. As I reached out it flickered again, becoming pixelated before returning to its hazy form.

Relief washed over me and I laughed, as much at my own foolishness as anyone else’s.

“It’s a hologram,” I announced. “Something from an alien ship, probably a rescue beacon pointing to where they’ve crashed.”

“Aliens,” I said. “Alien technology. Who knows what these ones can do? Dover, go turn us around.”

“But if it’s not a ghost-” Angelo began.

“If it’s not a ghost then it has real technology,” I said, rubbing my hands together in glee. “Real technology no human’s ever seen, and that we’ll be first to bring to market. We’re rich, boys and girls.”

Cheers rang through the corridor as Dover hurried back towards the bridge.

Cursed indeed, I thought to myself, trying to shake off the creeping feeling in my spine. Maybe we’d make this place a lucky one instead.