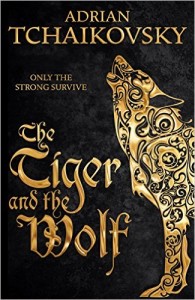 The Tiger and the Wolf by Adrian Tchaikovsky is an exciting fantasy adventure story. It has one of the best fantasy metaphors I’ve ever read for growing up. And, as you’d expect from Tchaikovsky, it’s a great piece of world building that provides a new and fascinating setting.

The protagonist of The Tiger and the Wolf, Maniye, is a tribal chief’s daughter. In her world, everyone can transform into an animal, a process called Stepping.

Which animal depends upon the culture they come from. Maniye lives in a wolf tribe, so the people around her can transform into wolves. The traders can become horses, the people of the distant southern lands alligators, the cave dwellers of the far north bears. Stepping gives the story its unusual and well-written action sequences, as characters shift between bodies to give them an edge in fights and chases.

One of the interesting parts about this is that Stepping is entirely voluntary. Which body to use is a choice characters make, unlike many traditional werewolf stories in which the animal takes over. This isn’t about a division between civilised and base instincts – it’s about what sort of person to be at any given moment.

For Maniye, that’s a tough decision.

Choosing Who to Be

Maniye’s father may be a wolf chief, but her mother was a tiger queen. She can turn into either animal, but violent tensions between the tiger and wolf cultures mean that her tiger form is completely unacceptable in her tribe. On the verge of adulthood, Maniye is about to face the choice of all those with two animal spirits within them, abandoning one and embracing the other.

As a metaphor for growing up, it’s not the most subtle, but it is powerful. Maniye is facing a choice between the different people she could be, the different heritages she comes from. It’s about the forms her parents would want her to take. She’s facing big choices about her identity, is under huge social pressure, and life seems out of her control. Her two animal souls are tearing her apart as she struggles to choose.

This could have ended up reading like a terrible heap of teen angst, but it doesn’t. Instead, it’s one more struggle for Maniye to face as she goes on the run, trying to define her own life and save that of a stranger. The final choice is predictable but immensely satisfying, and how she gets there is far from predictable. Like being a teenager, it’s more about the journey than the destination.

A Rich and Diverse World

When I started reading this book, I thought it was set in a world based on bronze age and dark age Europe. The more I read, the more it became apparent that that was my biases coming into play. As Tchaikovsky expands his world beyond the snowbound forests of the tiger and the wolf, we see civilisations influenced by real world examples from all over the globe. The wolf are reminiscent of hunting tribes from all across the icy regions below the Arctic. It was my background that coloured them Norse or Germanic. The world ofThe Tiger and the Wolf is actually far richer and more varied than that, and all the more fascinating for it.

Given the fierce online debates raging about diversity and representation in fantasy – debates which have fostered some gems of insight and a lot of ugly bluster – the diversity of this world reflects the themes of the book within a wider context. Fantasy culture is facing choices about what to be, just like Maniye. And like her, it is tearing itself apart over this. This book sets an example of a positive direction that choice could take us, and how that is compatible with the exciting stories more conservative elements claim to fear losing.

But honestly, most readers will neither know nor care about that. Good for them. What they’ll find is a gripping story, good characters and a cool new setting to explore. What more could you want?

I know Adrian Tchaikovsky personally, and my copy of this book was provided courtesy of his publicist.

But if I hadn’t liked the book I just wouldn’t have written about it. I’m not a pro reviewer, I mostly save this space for enthusing about cool stuff, and so if someone I know produces something that’s not to my tastes, I just don’t deal with it here. Call it my review policy, if you like. Andrew Knighton, taking the discreet way out since 1978.

And remember, my new book A Mosaic of Stars, collecting together over a year’s worth of weekly short stories, is available for pre-order as a Kindle e-book now.

A prisoner haunted by ghosts, or are they shadows?

A demon investigating an angel’s death.

Action, art and mystery all feature in my fantasy short story collection, By Sword, Stave or Stylus, out today as an ebook today via Amazon and Smashwords. 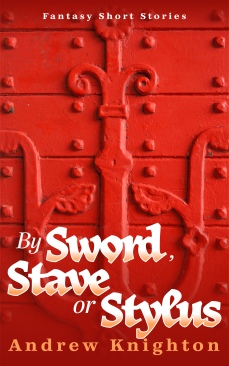 The stories in this collection:

It’s an eclectic selection of stories, and one I’m proud of. So if you’re looking for some reading why not go pick up a copy from Amazon or Smashwords. It’s only 99c for the first two weeks of release, after which I’ll be putting up the price to a princely $2.99.

And later in the week, once I’ve stopped reeling from the excitement/nerves of hitting the magic ‘publish’ button, I’ll discuss some of the stories in more detail.