The monster reared on its hind legs, thrashing at the air. Its hooves raised dust all around, and its voice was like the laughter of a mad god.

“Is it angry?” Moraika asked, watching it in terrified awe. Its long face, slender legs and muscled flanks gave it a beauty sadly absent from the llamas she kept in the hills.

“The Spaniards call it a horse.” Poma glanced from the monster to the body of its rider, who lay beneath a tree at the edge of town. “I heard that they each have one, and that they ride them in battle. These beasts crush men beneath their feet, while the riders cut them down with their magical swords.”

Moraika spared the Spaniard only the briefest glance. His clothes were well shaped and boldly coloured, though stained with blood. On his own he would have been fascinated, even on this third visit, but he was nothing next to the horse.

The creature reared again, trying to break free of the rope tethering it to a wooden stake.

“What will happen to it?” she asked.

“Same as its master,” Poma said. “Manco Inca has ordered the Spaniards killed, and this monster is their servant.”

Other villagers were gathering around with clubs and axes. They nodded in agreement, but none approached the beast.

“No!” Moraika could not believe what she was hearing. They could not destroy this thing of beauty. “Let me try another way.”

She strode over to the dead Spaniard and took the whip from his belt. She had seen him hit the beast with it last time he came to town, to claim his so-called taxes. That had seemed to quiet it.

Imitating the Spaniard’s movements, she twitched the whip until it made a cracking sound against the packed dirt. Approaching the horse, she hit the ground by its feet, trying to intimidate it.

The beast reared up, snorting, and lashed out at Moraika. One hoof hit her on the shoulder, knocking her to the ground. Clutching at the pain, she dropped the whip and rolled aside. Hooves hammered the ground where she had been.

Trembling, she rose to her feet among the other villagers. Instead of coming to her rescue they had stepped back in fear. Now they tried not to look at her or at the beast.

Moraika took a deep breath. The smell of blood filled her nostrils, coming off the dead body and the men who had killed him. No wonder the beast was lashing out. It must be terrified. Who did it know here except its dead master? And if he was anything to go by, with his whip, his sword and his taxes, what could it expect from men but cruelty?

It was hard for Moraika to approach the beast again. An echo of pain still tingled all the way down her arm, and she had to fight a great urge to turn and run. But she forced herself forwards.

Raising her hands she approached the horse. As she did so she sang one of the gentle, nonsense songs with which she soothed her llamas.

The beast’s eyes were wide, foam flecking its mouth. The stake creaked as it pulled against it. At any moment it might break free and trample them all to death. Moraika’s mouth was dry, but she kept singing, hands held out towards the horse.

It reared up again, legs thrashing. She closed her eyes and waited for the worst.

With a noise like the crashing of thunder, the beast struck the ground in front of her. Trembling, Moraika kept up her song.
Again the sound of thunder, dust billowing into her face. The beast was so close she could feel the heat of it.

Hot breath brushed her skin, and a mad, sputtering sound filled her ears.

She forced her eyes open. The creature was staring at her, nostrils flaring an inch from her hands. Slowly, still keeping up her song, she reached out and touched its face. The fur was short and coarse, yet felt sleek as she ran her fingers down it.

The horse took a step forwards, and Moraika flinched. Its head brushed against hers, and then a tongue as rough tree bark rasped across her cheek.

Moraika let out a sigh as she looked into the horse’s eyes. It was even more beautiful up close.

Kneeling down, she unfastened the rope from the stake. As the townspeople watched in awe, she ran a soothing hand down the horse’s flank before leading it away towards the stream. She felt exhilarated. To stand beside such a creature was like meeting the emperor himself, like walking in the company of some divine messenger.

“My name is Moraika,” she said. It sounded so mundane, but how else could she start? “What do they call you?” 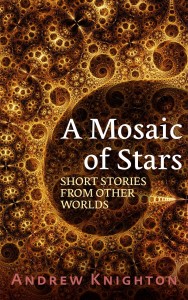 The encounter between the Incas and Pizarro’s Spanish conquistadors is one of the most fascinating and messed up moments in history. A couple of hundred armed reprobates took control of the largest empire in South America, and one of the reasons for their success was their horses. The Incas had never met creatures like them, and many were terrified.

This story is set some time after that initial encounter, when the emperor Manco Inca led a rising against the Spanish. It didn’t work out, but the rebels did take out some of the Spaniards – mostly those caught on their own while out visiting lands they had been given, as in this story.

If you enjoyed this story then there’s plenty more where it came from. My latest collection of short stories, A Mosaic of Stars, is out now as a Kindle e-book. Collecting all the flash fiction I’ve published on this blog up to the end if 2015, it contains a wide range of brief stories. So if you’ve enjoyed those stories and would like to have them in a handy collection, or would just like to help support the blog, then please go grab a copy. It’s only 99c for the first week, and free today as a special Friday treat. 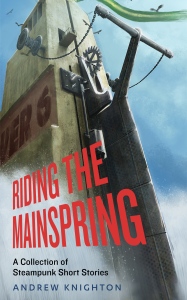 “Excuse me.” Isabelle strode across the yard of the stable, skirts held up out of the manure that littered the place. “I would like to speak with the manager.”

“That’s me.” The man had the narrow smile of a nervous weasel and a thin moustache that had never been in style. “Thomas Nathaniel Watkins, Speedy London Carriages, at your service.”

He extended a bony hand, which Isabelle reluctantly shook. Just because she was angry was no reason to abandon good manners.

“I wish to complain.” She stared Watkins in the eye. “Yesterday I hired one of your carriages for an important meeting. The horse died on route, and had clearly been in terrible condition before that. It delayed my journey and meant I missed my appointment with the Crown Prince of Blutagest.”

“Sorry about that, miss.” Watkins chewed on the corner of his lip. “What do you want from me?”

“It’s Mrs, not Miss,” Isabelle said. “Mrs McNair. What I want is an apology and some compensation.”

“Did the driver charge you?”

“He paid me back twice over, but that is hardly commensurate with-”

“Then you’ve been compensated.” Watkins bobbed his head and turned away. “Excuse me, I’ve work to do.”

He walked into the stables and Isabelle stomped after him. How dare this wretched man ignore her concerns?

It took a moment for her eyes to adjust to the gloom inside, and so to make sense of what she saw. Horses were lined up in thin spaces separated by metal bars. Pipes descended from the ceiling into each of their mouths, and some sort of grey slop was being pumped from a machine by the wall. There were blisters on their lips where the pipes entered. When one of the horses tried to step back, a lever swung down from the ceiling and lashed it across the rear. Several of the horses had red welts on their flanks.

“What is this?” She choked on the words, her own concerns all but forgotten at the appalling sight.

“This is how we get the speedy in Speedy London Carriages.” Watkins stroked one of the pipes. “Special diet and mechanical conditioning.” He frowned at her. “Why are you still here?”

Isabelle took a deep breath, not the most pleasant experience in a cramped room full of frightened horses, and turned her glare back on the man.

“I want…” The thought slipped from her mind as the lash descended across another of the horses. “That is I demand…”

It was no good. She couldn’t even string her thoughts together in here. Perhaps that was Watkins’ intent, the odious little man. She had to take this outside.

No. The thought stopped her as she turned toward the door. If the problem was this place, then the solution was not to run from it. Not with so much suffering on display.

“I want you stop this barbarity at once.” She pointed to the horses.

Watkins’ laughter sounded almost as unpleasant as the horses’ pain.

“I own these nags,” he said. “You can’t tell me what to do. In fact…” He grabbed her arm and started dragging her out into the yard. “You can’t be here. This is private property.”

The pain of his fingers digging into Isabelle’s arm was nothing next to the distress she felt at leaving the horses to suffer, or her indignation at being treated this way. But now her passions didn’t block her thoughts, they fuelled them.

“It is private property, isn’t it?” She dug her heels in, no easy feat on manure-smeared cobbles, bringing them both to a halt. “And this whole area is owned by the Duke of Kent, so you must lease from him. I wonder what he would say about letting you continue, if I told him about today.”

Watkins chewed at his lip again, eyes narrowing as he stared at her.

“You don’t know the Duke of Kent,” he muttered.

Watkins looked from her to the stables and then back again.

“Fine.” His shoulders slumped. “I’m sorry you were delayed. Let me get my bookkeeper and we’ll talk compensation.”

“And no more machines for the horses,” Isabelle said.

“Not as much as losing your lease will.”

“Fine.” Now it was Watkins’ turn to look indignant. “Not that it’s your business, but no more machines for the horses. Now will you just go away and leave me in peace?”

“Of course. I’ll come back tomorrow for my compensation.” Isabelle smiled and turned to walk away, then looked back one last time toward the odious Watkins. “And to see how much better you’re caring for your horses.”

Isabelle McNair is one of the stars of my steampunk adventure Guns and Guano, available as an ebook on most platforms, including Amazon. It’s free most places, and the sequel Suits and Sewers will be out very soon.

This particular story was inspired by reading a post on hollyiblogs, which cited an estimate that 3,000 horses a week died in London in the 1880s. It made me wonder about the lives and deaths of those horses, many of them worked to death as beasts of burden in an increasingly crowded and alienating urban environment. We often talk about the human cost of progress, but there are other sad costs too.

And if you thought this was worth reading, there’s more where it came from – my steampunk anthology Riding the Mainspring is free to anyone signing up to my mailing list. Why not enjoy some more tales of strange gadgets and Victorian life, all for a couple of clicks of the mouse.