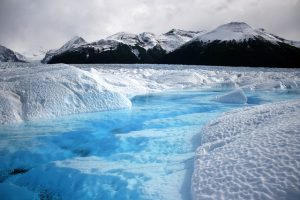 Auka’s breath frosted as she crossed the ice down to the Bright Cove. In one thickly gloved hand she held a harpoon tipped with whale bone, its shaft long enough to support her as she walked. But she did not dare use it that way. It was too important.

She had never gone down to the waters of the cove before. Few in the tribe did. But Cupun was horribly sick and the shaman had said that only the blood of a silver ray could save her brother. So here she was.

The sun was sinking over the frozen plains as she crossed the shingle and stood just out of reach of the waves. The rays were swimming off the shore, glowing with a cold light as they cut through the water. Some were the size of huskies, while others were larger than she was. She watched them and counted the waves, listening as they crashed into foam. Just as the shaman had said, every fifth wave was larger. That was when she must strike.

Drawing the harpoon back behind her head, she waited for a ray to rise on that fifth wave. One leapt and she threw, the harpoon hissing through the air, cord trailing out behind it. With all her will, she wished for it to strike true.

The harpoon fell short. The silver ray swam away. Auka hauled on the cord, bringing her weapon back in.

She tried again and again, but the rays were always too far out. To enter the water was to risk death as the rays swept her into the icy ocean. But to stay here was to give up all hope of saving Cupu.

Water spilt over the tops of Auka’s sealskin boots as she walked out. Within moments, her toes were numb and her feet tingling, but she pressed on, the sea soaking through her leggings and then her tunic, until she felt swathed in ice almost to her chest.

A glowing shape flashed by to her left, leaping from the peak of a wave. Another shot past in the water in front of her, and she felt a third brush against the back of her legs.

Then they were all around her. One slammed into her knees and her legs almost buckled. Another hit her from behind and she stumbled, stepping forward to retain her balance. A rock gave way beneath her foot. The water was up to her armpits. She could barely feel her legs. Even her mind was slowing as the cold grasped her.

She closed her eyes, the comforting dark preparing to swallow her.

An image of Cupun, lying deathly pale amid the blankets, rose out of the darkness.

As she opened her eyes, a wave rose in front of Auka, threatening to drown her. A silver ray shot up the back of the wave, cresting it in a spray of foam.

Auka threw her harpoon with all the strength that remained in her numb fingers. Pierced in its exposed belly, the ray flopped into the sea, shining blood seeping into the salt water.

The wave crashed across Auka, knocking her back. The water filled her mouth and nose. She choked, stumbled, struggled to place feet she could barely feel.

Then the wave receded and she could breathe again. She turned back towards the shore, the soaked edges of her clothing freezing as the deeper cold of night set in.

Behind her she dragged the body of the silver ray, trailing a thin stream of its precious blood.