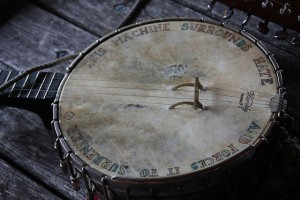 Part of Dirk had always longed to be musical. There was something magical about music, something transporting. But he had no instinct for it, and life made so many other demands that he’d never found the time to learn. So he made do with listening.

The music drew him to the heart of the funfair, just as it had so many others. Peering over heads and around top hats, he saw an extraordinary machine. Steam and sound rose together from a cluster of church organ pipes, to which other instruments were connected by fanbelts, cogs and pistons. There were fiddles and banjos, washboards and drums, even an accordion with its low, distinctive drone. Most amazingly, the instruments were playing without any sign of human intervention, apart from the grinning and soot-stained woman shovelling coal into the back of the machine.

It wasn’t just a mass of noisy instruments playing at random. The sound was beautiful to the point of hypnotic. The hard, hollow notes of the banjo transported Dirk back down the path of memory, to long nights out on the plains and journeys taken through the peaks of the Rockies. Without intending to, he found himself taking all the money from his pockets and pouring it into one of the buckets in front of the machine. All the other listeners were doing the same, and more were approaching, drawn by the music. Coins overflowed from the buckets, as seemed only right and proper.

A stubborn corner of Dirk’s mind screamed at him that they weren’t doing this of their own volition. He hadn’t chosen to put a week’s rent in the bucket. The machine was controlling his mind. He had to break free.

Yet the rest of him refused to care. His hand just flopped back down when he lifted it up. There was no need for action, just listening.

What was he worrying about anyway? Something about money and a bucket? Maybe he hadn’t brought any with him. That would make sense. Yes, that was it.

Once again he heard that hollow banjo sound. The funfair faded away, replaced by the plains and the horse drifting along beneath him.

Except that wasn’t how it had been. Those days had been hard work and hunger, not just sunsets and scenery. Like those banjo notes, it was a thing of melancholy, not comfort.

He clung to those notes, clung to the real world and its hard realities. The plains faded back into memory, and he was stood in front of that amazing musical machine, its operator rubbing her hands as she wandered in front of the empty-eyed audience, collecting up the buckets of money.

Dirk grabbed the bucket in front of him, heavy with nickels and dimes, and flung it with all his considerable strength. It hit the heart of the machine with a mighty clang. Coins flew and steam sprayed from buckled pipes. The music went from melodious to discordant. The operator stared around in alarm as the audience blinked their way back to reality.

A pipe hurtled into the air. People ran screaming as another one flew past, demolishing the bearded lady’s tent. Dirk ducked as the whole thing exploded, burst pipes and snapped strings flying every which way.

As the sound faded, a banjo fell with a clunk at Dirk’s feet. He picked it up and turned to walk away. This time he’d find the time to learn.

This story was inspired by listening to the awesome Yan Tan Tether singing at the Otley Folk Club on Wednesday. This song doesn’t feature any instruments, but will give you an idea of the enchanting and haunting tunes I enjoyed.

And if you’d like to read more of Dirk’s adventures, steampunk adventure story Guns and Guano is free on Amazon Kindle and Smashwords.

Photo by Jim, the Photographer via Flickr creative commons.