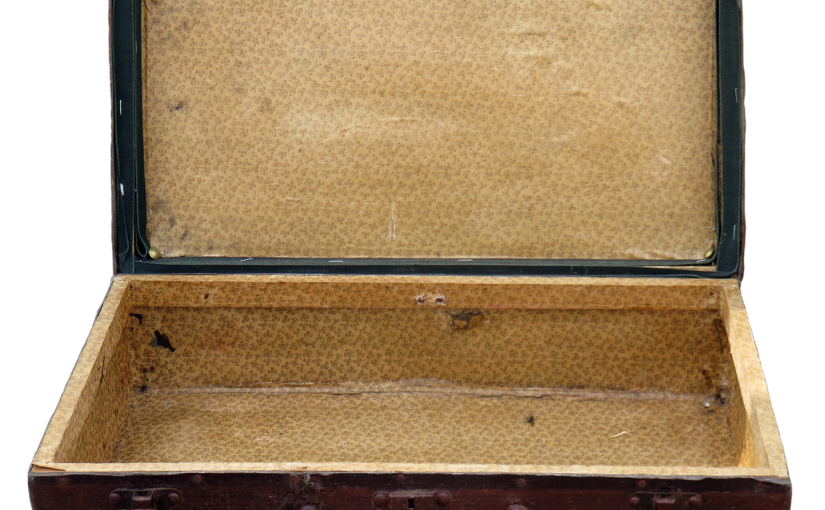 The toymaker stood on the wind-swept platform, hands clenched around the handle of his suitcase. The case rattled, not just from the shaking of his nerves but from the impatient wriggling of its precious cargo.

The toymaker bent over the case.

“Ssh,” he whispered into the lock. “I know it hurts, but you mustn’t move. Not until we’re safely in the city.”

The toymaker straightened and looked up at the chalk board listing trains. Someone had just wiped away the one they had missed, leaving only a white smear on the black and a smell of coal smoke in the air. The toymaker had tried to be clever, arriving just in time so there would be less time for the guards to notice him. Instead, he had arrived just too late. To leave and return for the next train would draw the attention he wanted to avoid, and so instead he waited, his muscles tense and palms clammy, the heavy case threatening to slip from his grip.

A pair of border guards strolled down the platform, bright buttons gleaming against black jackets, rifles slung from their shoulders. The real border was twenty miles away, halfway across the great plain that separated the city from the outlands, but no-one challenged the guards’ presence.

The toymaker huddled back into his coat, trying not to catch the eye of the guards. But they kept moving closer, as if drawn by an invisible string.

The guards stopped in front of the toymaker.

“Papers, please,” said one of them, holding out his hand.

“Of course.” The toymaker set the case down and reached inside his coat, fumbling for his precious papers. He forced himself to smile. “Lovely day, isn’t it?”

“Not really.” The guard flexed his fingers. “Come on, cough them up.”

The toymaker held out a bundle of paperwork. There were his identity papers, signed by the local doctor and counter-signed by his town’s mayor. There was the passport, stamped to show that he was a skilled worker of the sort the city needed. There was his letter of transit, showing that he had passed the immigration process. And there was his ticket, one way across the plains.

He held his breath as the guard looked through the papers. He had heard horror stories of people banned from the crossing because they looked at a guard wrong, and there was more reason than that to stop him. The rustling of pages was like sandpaper scouring the rough ends of his nerves.

“Seems to be in order.” The guard handed back the papers. “Enjoy your journey.”

The toymaker smiled and his shoulders sagged.

The guard made to move on, but his partner stopped and pointed down at the case.

The toymaker tensed, took a deep breath, forced himself to stay calm despite the hammering of his heart.

“My whole life,” he said. “Clothes, tools, food to see me through the week.”

“Show me,” the guard commanded.

“Don’t you have other people to-”

The toymaker carefully laid the case down flat on the paving stones. Above him, the station clock ticked down to the next train. He opened the catches and lifted the lid, revealing a neatly folded jacket and shirts.

“What’s that ticking?” the guard asked.

The toymaker pointed up at the clock.

“No, there’s something else.” The guard knelt over the case. His companion brought his rifle around to point at the toymaker’s feet. “Something that got louder when you opened it.”

The guard pulled back the jacket and the shirts, then a pair of trousers underneath.

A figure lay exposed. A boy of brass with a clockwork heart, contorted around himself to fit inside the case. His enamelled eyes flickered in the sudden light.

The toymaker stifled a whimper.

The guard rose and snatched the papers, leaving a cut across the toymaker’s palm, a sudden sting.

“You know the rules.” The guard kicked the case for emphasis. The lid fell shut on the toymaker’s son. “No mechanicals in the city.”

“Please,” the toymaker said, hands clasped as if in prayer. “He won’t do any harm. He doesn’t even need feeding. He just-”

“No mechanicals.” The guard tore up the toymaker’s letter of transit and cast the shreds into the wind. They blew away like ashes from a funeral pyre. He crumpled up the ticket and thrust it into his pocket, then dropped the passport and identity papers onto the cold stone.

“Get out of here,” the other guard said, pointing his gun at the toymaker’s chest.

“But there’s no work left,” the toymaker said, his voice rising to a high and pleading tone. “Almost no food to be had. The city’s my only hope.”

“Should have thought of that before you did this.” The guard kicked the case and a cry of alarm burst from within. “Now take your abomination and get out of here.”

With mournful movements, the toymaker lifted the lid, helped his son out, and dropped his useless papers in with the clothes before locking the case shut. Waiting passengers stood back, some watching him sadly, others muttering indignantly, as the two of them walked wearily down the platform, through the ticket hall, and out into the street.

The toymaker sighed. It would be so easy to give in, to go back to his workshop, scrape by on what work he could get, and wait out the days until the whole town faded away. But then what would happen to his boy?

There would be other trains, other guards who were less observant. By the time he saved up for another ticket, these two might have forgotten him.

He had to hope.

“Come on,” he said, taking his son’s hand. “We’ll go home and wait for our train there.”