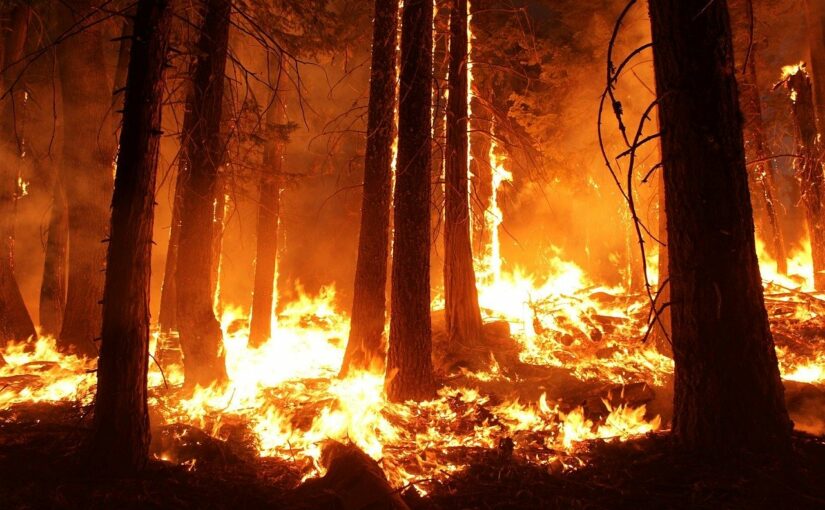 Fifty feet above my head, there’s a wildfire blazing. Towers of flame stretching into the sky, destroying everything from windweed to prefabricated houses. The nearest city is probably ash by now, but I’m down here, cool, safe, and mercifully alone.

It might have been useful to have company when I reached the shelter. The firestorm came in so fast, I rammed my car into a tree racing here, then gouged my leg on the twisted bumper. It’s not easy to bandage yourself when you’re shaking with shock, but I did it, and I’ll be fine once the painkillers kick in. Better to deal with it myself than to be stuck down here with some random stranger, listening to their snoring and clearing up their discarded trash. If I wanted company then I would have stayed on Earth.

Time to go check out the kitchen, see what I’ll be living off for the next few weeks.

If I ever meet that colony recruiter again, I’m going to kick his ass. He told me these bunkers were heatproof, but I’m sweating like a politician in front of the press.

Father was the bear, you see? But then the waves, and the falling, and it’ll all be ecstatic.

Three days of fever dreams, and I wake up to find that my leg’s still infected. I replaced the bandage, but the new one already stinks like a garbage dump. This place has a tiny shower cubicle, so I washed the sweat and crud off the rest of my body, but the wound on my leg hurt too much to be cleaned. Then I had to lie down for two hours, because apparently ten minutes of standing is more than I can take.

If only I’d been more careful getting out of the car. Just a few seconds of caution would have saved me a world of pain. If I’d looked down, stepped a little wider, or stopped at that first tearing sound, instead of letting fear of the flames rush me.

I’m reduced to eating cold meals out of cans because I used up all my strength on that shower and there’s no-one else here to cook. Can’t even call for a takeaway. I’ve watched the same stupid movie on loop three times because it’s easier than using the remote, and now I’m dictating rather than typing. Seriously, what have I become?

My temperature’s back down and the leg’s healing nicely. I’m going to have an awesome scar.

Now I can make use of this place, I can really appreciate the opportunity it’s given me. There’s no work to do, no one asking if I want to go for drinks. I don’t even have a virtual connection, because any affordable coms antenna would get melted by the fire. So it’s just me, my thoughts, and a library of digital entertainment. I’m going to work out, read a few classics, and really take some time for myself.

Of course I’m not saying I’m glad of the wildfire, but this is going to be exactly the break I need.

Which idiot thought that this was a planet worth settling? That we should live through a firestorm once a decade just so they could mine the minerals? And now we’re here, why aren’t we all living out at sea?

Fuck you, first settlers. And fuck you, colonial recruiter.

Nearly four weeks. The hatch sensor light blinks orange, saying that the temperature’s falling above me, but not enough yet.

I got through two books before I had to give up. The air down here must be missing something, because I don’t normally have a problem with concentration. Now I sit limply in front of a screen, watching the same sitcoms on loop, because the moments when the couples connect make me feel warm inside and the jokes almost make me laugh.

These are the people I can live with. People on a screen.

I just spent an hour staring at the hatch, wondering how far through the fire I would have to run to find people.

A big day in two ways.

This morning, for the very first time, there was no pain at all in my leg.

This afternoon, for the first time, the hatch sensor dropped down into the green.

The advice we were given is clear. Unless you urgently need help, wait for three days in the green before you go out. That way you can be sure that the fire won’t flare up again.

I sit and stare at the sensor. In the background, canned laughter rolls out over cheap jokes. Soon, it’ll be time for the wedding episode. Until then, this little green light has me transfixed.

It’s not quite been three days, but it’s close enough.

I’m dictating this with one hand on the hatch. In my imagination, there are rescue workers up there, come to check for bunker entrances that have become buried or jammed shut. People in masks and overalls striding through swirling clouds of ash.

The scar tissue feels stiff when I stretch out my leg. I need to be more careful this time, but I also need to get out into the world. Not for the people, of course. For the space and the clear fresh air.

They say to write what you know, so hey, here’s a story about someone living in isolation. I bet there aren’t a bazillion of those out there already.