The crowd roared as two knights emerged onto the tilting field, their horses advancing with perfect control, their lances raised so that the blunted tips shone in the sunlight.

Beside me in the stands, the Lady Matorell let out an excited gasp. For a moment, I assumed that the Lord Matorell was taking the field, but then I remembered that he had been knocked out already, flung from his horse in one of the early matches. The lady’s attention had not been drawn by her husband, but by a handsome young knight with a halo of blond hair and a smile of unshakable confidence. A strip of cloth was tied around the armour of his upper left arm, its yellow and blue a match for my lady’s dress.

“How romantic,” she whispered. “Sir Arnau knows that he cannot have me, yet still he wears my colours.”

“Such chivalry,” I replied, smiling through my envy. This was romance like the storytellers proclaimed, the perfect and chaste love of a knight who knew that his desires could never even be spoken. I dreamed of any knight’s attention, while my mistress had it all: a rich and powerful husband to provide for her, and a storybook romance on the side.

“He barely even speaks to me,” she said. “The poor man must be afraid that his passion will overcome his senses.”

She let out a sigh that had nothing of sadness in it.

Sir Arnau donned his helmet, obscuring the features over which so many women had swooned, and lowered his lance. At the far end of the field, his opponent did the same.

I had imagined moments like this as I read to my mistress during long winter nights, but until this day I had never understood the reality of the joust. The thunder of hooves, the crash of blows, the thud of bodies on the ground. One knight had been carried off with his leg bent out of shape, another with blood streaming from his arm. It was thrilling and frightening all at once. My heart raced all the harder for these gallant men in their fine and gleaming armour. It made me feel my lovelessness more, and I slumped in my seat.

In the stands opposite, our host lowered his hand. The two knights set the spurs to their steeds, which sprang into action, galloping toward each other. For a moment, only hoof beats broke the silence. Then came the crack of lances, the cheers of the crowd, the fall, the thud.

I saw Arnau’s horse ride on to the end of the lists, while his opponent cast aside a broken lance and raised his fists in triumph. But Arnaud himself was hidden by the spectators below us. I stared at them with my hands clutched to my chest, praying for his safety.

A knight rushed onto the field, followed by a pair of squires. It was Lord Matorell, dressed in the same blue and yellow as his wife, the colours of his house. My heart beat faster. Many stories saw spurned husbands confront their chivalrous rivals. Lady Matorell took my hand and gripped it tight.

Lord Matorell bent down. When he rose, he was supporting Arnau, the younger man leaning on his shoulder while he waved off the attention of the squires. As they hobbled from the field, the two men smiled at each other, laughing in spite of Arnau’s pain.

I had seen smiles like that between men before. I remembered my brother, before he removed himself from temptation by joining a monastery. There was more than one type of love a young knight would have to hold concealed, more than one person blue and yellow could stand for.

I looked at Lady Matorell, and just for a moment her expression narrowed into something bitter. Then Lord Matorell whispered in Arnau’s ear, and the two of them turned to wave at us.

“So noble!” Lady Matorell proclaimed, a little too loudly to go unheard. “The two of them together, despite their feelings for me.”

“A beautiful thing, my lady,” I said, matching her forced smile.

The envy in my heart wilted away. It was easy to be jealous of a real woman’s fortune, but not of a story, whoever had made it up.

This story was inspired by an article on clothing in Catalan medieval romances by Dr Ester Torredelforth, in Ties That Bind: Love in Fantasy and Science Fiction, edited by Francesca T Barbini. If you enjoy analysis of sci-fi and fantasy then the whole collection is well worth a read. 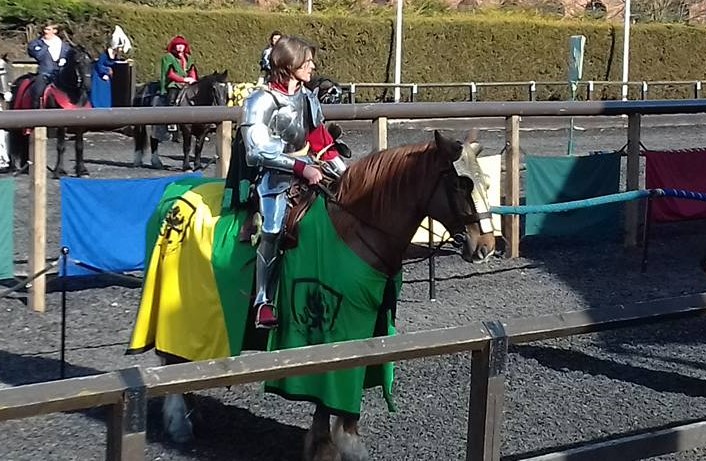 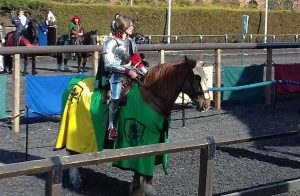 Sir William stood in the middle of the tent while his squire Oliver buckled on his armour. As each piece closed around him, he felt a little more secure, a little more at home in himself. He had worn the armour so often over the years, it was like a part of him now. His life at court was comfortable, jousting for the king far safer and more rewarding than fighting on the borders. But donning his metal shell reminded him of the rough camaraderie of the marching camp.

Last night had been a fine night. He had been toasted by the King, shared whispered words with the lady Rosamund, been honoured to converse on the nature of war with Archbishop Francis. It left him in a fine mood, ready to take on all challengers in the tilting yard.

The steward John appeared in the entrance to the tent.

Oliver glanced briefly at his master, but they both knew that he would have to obey the King’s steward. William gave him the nod and out he scurried.

“How can I help you, master John?” William asked, flexing his arm to test the positioning of the plates.

“You ride against Burgundy’s champion in the first bout,” John said, striding back and forth across the width of the tent. “The King seeks an alliance with that lord. It would be best if the Burgundians were to feel good today.”

“We all want to feel good,” William said, smiling.

“Have you taken too many knocks to the head?” John glared at him. “Must I explain the situation to you?”

William sagged as the implication caught up with him.

“The King orders me to lose?” he asked.

“The King would never order such a thing. Let us just say that your loss would be most convenient, for you as well as His Majesty.”

The steward strode out, leaving William alone. He sat with his back against the tent’s central pole, feeling deflated. All the cheering and the toasts last night had come because he was a winner. Was he about to lose all that?

But he had a duty to the King, and the King rewarded those who served him well. William pulled himself back to his feet. There was pride to be taken in doing his duty, just as much as in winning.

Lady Rosamund’s maid Isabelle appeared in the doorway. She held out a silk scarf, and when William took it the air was filled with Rosamund’s scent. His heart beat faster.

“My lady asks that you wear her favour when you ride today,” Isabelle said, eyes demurely lowered. “Win in her name and all that your heart desires can be yours.”

She bobbed a curtsy and backed out.

William lifted the silk to his face and took another deep breath. All that his heart desired, and all he had to do was win. A thrill of anticipation ran through him at the thought of Rosamund’s smile, of her voice, of her golden curls cascading down her shoulders.

Except that he had to lose. The King had not ordered it, so technically William would not be disobeying him if he won. But duty was important, however it was phrased.

He sank back to the ground with a groan, clutching the silk and struggling with the choice that faced him.

A third figure appeared in the doorway. William was surprised to see Archbishop Francis smiling down at him.

“Your grace!” William leapt to his feet, a loose vambrace clanging against his arm. “Thank goodness you are here. I need spiritual guidance.”

“Is it about the joust?” the Archbishop asked.

He pulled a pair of stools from the back of the tent.

“I am glad to see that my words sank in,” the Archbishop said, accepting a seat. “The violence of this spectacle needs to be curbed. Good Christians should not be spilling each other’s blood for entertainment.”

“I…” William frowned. This sounded familiar. Had the Archbishop said something like it last night, when William was over-excited and full of wine?

“All that the church asks is for a few good knights to ride out into the lists and then refuse to fight.” The Archbishop leaned forward eagerly. “I assure you, God will approve of your abstinence from the struggle. Your renunciation of this so-called sport will be heard all the way to the gates of Heaven.”

He laid a hand on William’s shoulder.

“God bless you, my son,” he said. “You do his work. Now I must go convince the others.”

He rose and walked out.

William sat, head in his gauntleted hands, staring at the floor. His armour felt like a great weight dragging him into the dirt.

Oliver reappeared in the entrance to the tent.

“Should I finish buckling you up, master?” he asked.

Living in Leeds, I can regularly visit the Royal Armouries Museum, one of the coolest places a military history fan could possibly find. They have regular reenactment events to entertain and inform visitors, and I recently got to see jousters practising for an international tournament. It was amazing to see the thundering reality of men and women in full plate armour galloping at each other on horseback, lances shattering at the impact. And of course, that’s what inspired this story.