I’m currently more excited about comics than I’ve been in months, and it all comes down to one release – Kieron Gillen and Jamie McKelvie’s The Wicked + The Divine. It’s everything you’d expect from this talented team – beautiful illustrations, characterful dialogue, an intriguing mix of modern culture and fantasy. It’s the second best comic I’ve ever read about pop music as magic.

So naturally I’m going to talk about another comic – Phonogram. 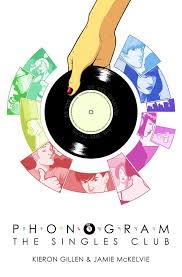 Memories of music past

The first volume of Phonogram, Gillen and McKelvie’s previous collaboration, came out in 2006. Collected as Rue Britannia, this was the story of phonomancer David Kohl, a man with the power to make magic through music. Not playing his own tunes, but channeling the power of other people’s records. Ten years on from the phenomenon of Britpop, Kohl took a stroll down musical memory lane, digging into that era’s music, a mixture of daring and disappointment, in an attempt to solve a curse falling on him in the present.

Rue Britannia was unique and fascinating, and perhaps a bit self-indulgent. You didn’t have to have listened to a Shed Seven record to enjoy it, but if you remembered Menswear or had leapt around a nightclub to the sound of Elastica then it was going to be much more personal for you.

I don’t remember when I discovered Rue Britannia, but I was fascinated by its flawed and daring mishmash of subjects, as well as nostalgic for a musical era I’d experienced slightly differently from Kohl. It was enough for me to buy the second collected volume, The Singles Club, and…

There are comic series that I love as much as Phonogram, if not more. The jagged science fiction poetry of Transmetropolitan. The surreal humour and world building of Chew. The noire grandeur of 100 Bullets. But for a single impeccable volume, consisting of seven spectacular individual issues, nothing beats The Singles Club.

The Singles Club consists of seven short character studies, all set around the same night out in the same club. Each one contains a complete character and story arc, intersecting with the others to add depth to the whole. Each one grounds its fantasy and character elements in a passion for pop music that connects the story to familiar early adult lives. The art and writing are both clearer and more characterful than the previous volume. It is a thing of beauty that should appeal to anyone who enjoys both music and comics, or anyone looking for an offbeat approach to fantasy and magic, or frankly anyone with good taste (OK, maybe I’m getting a bit subjective there, is it still subjective when I’m clearly right?).

This is literature as a presentation of character, of growth, of the joys and challenges of life.

The Singles Club is the only book in my house that I read several times a year. I love it.

A magic about empowerment

The Wicked + The Divine is about musicians as people with magical power. Their ability to craft songs is clearly central to their ability to do something more potent. That’s all well and good, but it restricts power to the hands of those who can strike up a tune. There’s an implied message here – ‘if you’re creative then you’re special’. It’s a familiar message, and not a bad one, but it has a certain elitism to it.

Phonogram carries a message that is more egalitarian. For all the snide elitism of characters like David Kohl, the underlying message is that culture isn’t just about creativity, it’s about appreciating and being empowered by what others have created. It’s fandom as empowerment. It says that your love of music, or any other cultural form, is as valid and as powerful an act of empowerment and self-creation as anything else. And I think that that is a fabulous message.

Listening to music, loving music, discussing music, sharing your passion, these are actually incredible things. The same applies to the fandom of TV, of books, of films, of any other form. Being an engaged audience makes us come alive. It creates bonds between us. It is as vital to a thriving culture as the acts of creation that it revolves around. Appreciating that, making it central to a story, that’s a great thing.

Go forth and listen

The Wicked + The Divine is currently coming out month by month via Comixology and comic shops. If you’re into comics you should give it a go – the first issue certainly promises good things.

But Phonogram, and The Singles Club in particular, that is a truly great thing.

And in the spirit of that book I give you a mission today. Go forth and find a song that you loved in your formative years. Or if you’re still in those formative years then just a song you loved recently. Sit down and listen to it, doing nothing else with the time (OK, you can dance, though personally I’ll be leaning against a wall trying to look nonchalant, because that’s how sixteen-year-old Andrew rolled). Then come back here and tell us all why that song is so damn awesome, or why it seemed that way to you at the time.