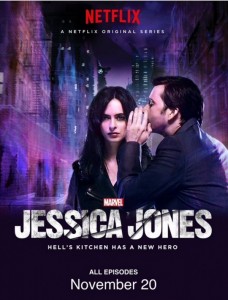 David Tennant has become nightmare fodder. Still suited and smiling, just like when he played Doctor Who, as Killgrave in Jessica Jones he has turned his charm into a thing of menace, digging into the darkest corners of human horror. I think he may have presented us with the ultimate in male villainy, an expression not only of brutal selfishness but of the darkest imbalances in gender relations.

Jessica Jones is the latest addition to the Marvel cinematic universe. Like Daredevil, it’s a Netflix show that explores the murkier corners of Marvel’s superhero comics, full of adult themes and street level vigilantes. The protagonist is a private detective suffering from post traumatic stress, who copes with her life by drinking hard and pushing away her friends. The return of Killgrave, the mind controlling villain who almost destroyed her, forces her to face the worst in herself and in the people around her. It might be her shot at redemption, or it might destroy her utterly.

So why do I consider Killgrave the ultimate male villain? Wouldn’t that be some muscle bound thug running around smacking people with his big fists and bigger guns?

No. As this article eloquently and unsettlingly lays bare, the power of men over women in our society, and the threat we hold, is more subtle and insidious than that. It creates a situation where women constantly hold back from expressing themselves, and live in fear of every dark street, however safe it might seem. Where they retreat from low level intrusions rather than feeling they can make clear how they feel. Where they constantly feel that they have to de-escalate confrontations, even as men push their views and desires forward. It is an insidious, socialised sort of mental control that left me stunned when I read that article, talked to women I knew, and realised that this is very real.

Killgrave isn’t always subtle. He is a rapist, in the most literal and awful sense of that term. But his mind control also acts as a metaphor for rape and the threat of gendered violence. He forces people to participate in activities against their own will. This leaves them feeling violated, traumatised and in many cases unable to tell others about it. Strong willed characters are turned into festering pools of insecurity, while the memory of Killgrave lives within their minds every day of their lives. They can never escape how he used them, because they see constant reminders of him in themselves and in the people around them.

Part of the power of the presence of Killgrave lies in Jessica Jones’s response to him. We get to see her, and others around her, fighting back against this villainy. We also get to see women’s responses to men in other parts of their lives, in particular the moments when those men act in ways that make women uncomfortable, or when they try to take over. The sort of shitty behaviour I hate in Arrow‘s Oliver Queen gets called out here. Killgrave may be a terrifying embodiment of male villainy, but that doesn’t mean that the women opposing him are turned into mere victims. There trauma is there to be seen, but so is their fight back.

In confronting us with Killgrave, Jessica Jones has the opportunity not only to raise awareness among non-geeks of just how powerfully superheroes can explore real issues, but also to raise awareness of harmful inequalities. I hope that it added fuel to both conversations, but I know which is more important. It’s the one that will have David Tennant haunting your nightmares as well as mine.