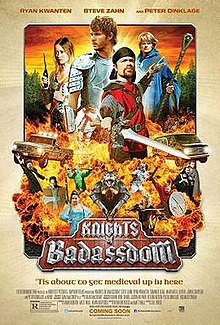 Sometimes a film comes along that, whatever its merits, so perfectly captures something about your own life that you love it. Maybe it portrays your job, or your family, or that awkward relationship you were in when you were young. I just found one of those films.

Knights of Badassdom is a comedy/horror/action/fantasy film about a group of live roleplay (LRP) gamers whose imaginary fantasy world gets invaded by a real and terrifying monster (if you aren’t familiar with LRP, there’s a good explanation here). As someone who’s spent years dressing up and running around hitting people with fake swords, and a Peter Dinklage fan, I was bound to watch this sooner or later. Unsurprisingly, I loved it.

Lets be clear – this is a film about geeks that laughs at the geeks. But that’s in the nature of comedy films – the characters are going to spend a lot of time looking foolish. What won me over, and convinced me that the film’s heart was in the right place, was the portrayal of LRP. The game we’re shown has the exact combination of naffness and awesomeness that has been the heart of most of my LRP experiences, and is why I love the hobby. There are cool costumes, but there are also t-shirts under armour, missing props, and coke cans weighing down the corners of the magical map. There are heroic speeches, and others that fall flat. There’s action and drama interspersed with pratting around. The conversations see in-game dialogue interspersed with out of character jokes. People’s real lives and their game lives intersect in messy ways. There’s even a jokey in-game name for the car park, in the same way that many people I know refer to a particular supermarket near a LRP site as Asgard.

I should be clear – not all LRP is like this. Go to a Profound Decisions event and you’ll see something far classier than in Knights of Badassdom. But that doesn’t detract from the joy I’ve taken over the years in those slightly naff games, where the out of character jokes were as integral to the fun as my sense of immersion in an imaginary world.

And the characters – they aren’t a perfect cross section of LRPers by any means, but they are a familiar bunch. There’s the guy who’s just there to hang out with his mates, and who’s really more interested in music and his love life than the game. There’s his buddy who spends the whole time high, drugs fuelling his intense and somewhat insane roleplay. There’s the one who’s more interested in the rules and experience points than acting out a role. The event runner who can see amazing and varied worlds in a bunch of nondescript clearings, and whose enthusiasm drags his friends along for the ride. The character who’s all about the fighting. The actor who’s there to play a role. Even the intolerant outsiders who mock the LRPers while indulging in their own obsessive and equally silly hobby.

If I have a problem with the film, it’s that women are under-represented in the speaking roles. But while the gender balance in the hobby is getting a lot better, there are still games where the cliché holds, with a bunch of blokes and very few women. And the film-makers balanced this up at least a little with the extras. On wider issues of representation, the presence of a dwarf, a character in a wheelchair and a couple experimenting with polyamory, all without comment or judgement from the other characters or the film’s plot, struck me as relatively enlightened by Hollywood standards, and representative of the accepting environment that LRP fosters.

I have no idea how LRPers in general have reacted to this film, whether it’s with excitement at being represented or horror at the way we’re represented. But for me, it was almost perfect. Even the slight naffness of the final act’s villain and conclusion, though not part of the LRP, felt fitting for a film set within the hobby. It would be hard to better capture what this hobby has always felt like to me, why I love it, and why for many years I felt embarrassed about it. Because LRP, like this film, is often a bit naff but almost always a lot of fun, and far better if you don’t take it seriously. Kind of like life, I guess.