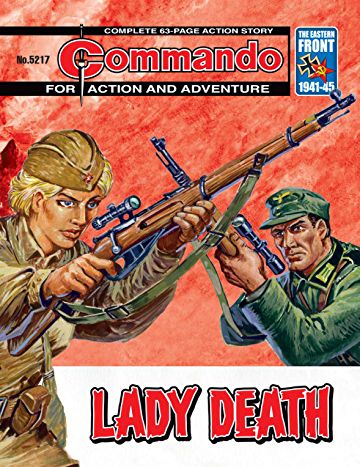 War has come to the Ukraine, German tanks driving back the Red Army in a brutal mechanical tide. Faced with the prospect of losing everything she holds dear, Svetlana Ivanovna Korzh takes up the gun, ready to defend her homeland. Turned from a teacher into a sniper, she heads into the streets of Odessa in a desperate attempt to stop the onslaught. But as her friends start to fall, a far more personal struggle begins…

Lady Death is my latest story from Commando Comics, brought to life by the art of Manuel Benet. It was inspired by Svetlana Alexievich’s extraordinary history book The Unwomanly Face of War, which explores the role of women in the Red Army in World War Two, their experiences both in action and in transitioning to and from civilian lives. It’s one of the best history books I’ve ever read, and I can’t recommend it enough for the way it brings forgotten stories to light and personalises a vast historical narrative.

While an action comic could never do justice to the complex and difficult lives these women led, I wanted to at least draw attention to their experiences, from the harrowing losses to the touching moments of friendship amid the horror of war. In doing so, I’ve taken fragments of reality and stitched them together into a fictional whole. Many elements of the story are taken from real life. The recruiting officer who doesn’t want to accept women. The troop trains strafed on the way to war. The wedding dress made from parachute silk. The partisans fighting in the catacombs. And most importantly, the thousands of female snipers who risked their lives, only to be forgotten in the aftermath.

Historical storytelling is a thing, a delicate balance of truth and fiction. I hope that I’ve included enough truth here to make the story worthwhile, and enough fiction to keep you entertained.