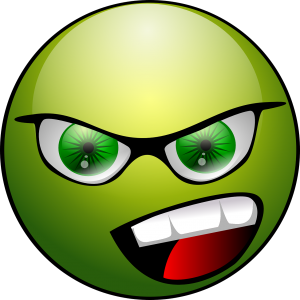 I use swearing quite a lot in my writing.

In fairness, I also use it in real life.

This is a point of disagreement between me and my mum. Not because I swear in front of her – I know better than that. But because we have opposing views on swearing.

To her, as to many people, it’s something needless and unpleasant.

But to me, it’s a vital part of our language. Swearing is an emotional carrier. It’s not about the meaning of the words themselves – that usually makes no sense in context. It’s the ability of swearing to accentuate the emotional tone of a message, whether that tone is anger, admiration, humour, or disgust.

Don’t get me wrong, there are problems with swearing. Certain words reinforce unpleasant implications about gender. Others reinforce taboos around sexual activities.

But in and of itself, I think that swearing is a vital part of our language.

Swearing remains an awkward subject. Even within the limited confines of my house it’s divisive – I love to hear it entertainingly deployed, while Mrs K. can’t stand to be in the room while Deadwood‘s on because of the language. But it’s a linguistic tool, one that’s frequently used, one that can be a powerful cultural signifier, and one that we should consider when writing.

My view on swearing is that it works as an emotional carrier, words emptied of their literal meaning so that they can express emotions that we are not encouraged to describe. Many of us aren’t good at describing our love or hatred for something, and even when we do the effort of assembling the words may get in the way of unleashing our emotions. A good swear lets that out, and this may be why it’s more prevalent among people who are frustrated and ill-equipped to express their own needs.

But there are still taboos around swearing. If there weren’t it would lose that emotional power. The act of defiance, the chance to see a shocked response, is part of the catharsis swearing can achieve. These words aren’t neutral and universally accepted, and deploying them can be a form of conflict.

This is part of the power of swearing in telling a story. A character who swears may shock others, may escalate or enact conflicts through those words. The fact that a character swears and the sort of swearing they use can tell you a lot about them. And swearing can create humour, even poetry, through the way it is used, particularly the brutal deployment of bad language in incongruous situations. Just watch Bunk and McNulty’s kitchen crime scene from the first series of The Wire, or any number of scenes of Malcolm Tucker from The Thick of It, to see these uses skillfully combined.

This isn’t to say that writers should always use swearing. But it should be an option in our arsenal of writers’ tools, one whose absence or presence can help give a story form.

Language can be a wonderful thing, as demonstrated for the gazillionth time in this article on the BBC news website. The article explores ten forms of endearment from around the world, from ‘fruit of my heart’ to ‘my flea’.

One of the wonderful things this highlights is the poetic role of idiom in language. I was recently watching an episode of Archer in which a character struggled again and again with translation because the speeches he was translating used American English idioms. Because idioms are culturally specific, their meaning rooted in their native culture and often lost in the depths of history, direct translation turns them into gibberish. But because of those cultural and historical roots, they are highly evocative in the native language.

They also reveal something about the culture they come from. The use of ‘gazelle’ as a term of endearment is rooted in Arabic history and taboos against direct depiction of certain subjects. The use of ‘little elephant’ in Thai connects to religion, history and even national pride. The Chinese ‘diving fish swooping geese’ evokes for me the precision and poetry of the land of Confucius, and is a reminder of the vast cultural differences between China and Europe.

Idioms speak powerfully of their native cultures. If as genre writers we can create idioms for our invented cultures then they can add depth through their poetry and all they imply about their origins, as long as the audience still understands our meaning. We need our idioms to translate.

And now, my little pirate robots, I’m off to write.