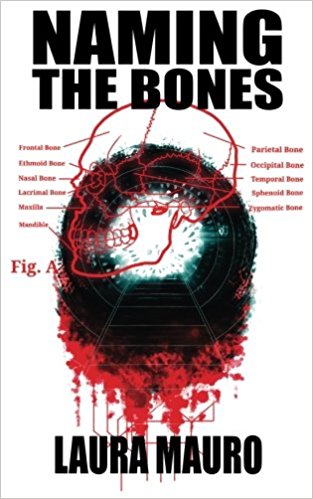 “First, there was darkness. There were other things too: burning, and frantic motion, and people crying somewhere very far away. But the darkness came first…”

Physical darkness is one of the classic symbols in horror. It’s the place of danger where unnamed things lurk. In as far as the monsters often represent parts of our own psyches, the darkness represents the subconscious, the fearful place where malfromed thoughts and feelings lurk, waiting to spring out at us. As such, the darkness is the perfect beginning for Laura Mauro’s Naming the Bones.

A Story About Mental Health

Naming the Bones is a story rooted in mental health. Londoner Alessa Spiteri, the protagonist of the story, survives a bomb attack on the tube. In the aftermath, she finds herself overwhelmed by the psychological trauma. Then she sees a monster lurking in the darkness and begins to fear that she’s losing her mind. That is until she meets someone else who’s seen what she has, someone with whom she can maybe face the monsters, both in the tunnels and in her own mind.

Mauro’s book addresses one of the most important themes in mental health – how you deal with it. The mechanisms of coping, control, and recovery that sufferers deal with.Even the name of the book points toward this. One of Alessa’s coping strategies is to calm her mind by listing the names of the bones in the human head. Her psychological

Even the name of the book points toward this. One of Alessa’s coping strategies is to calm her mind by listing the names of the bones in the human head. Her psychological defense is built around her understanding, and by extension control, of the physical defenses that protect a brain and the mind within.

My experiences with mental health aren’t the same as Alessa’s. I’ve struggled with depression and have friends with a range of other issues, but I’ve never had contact with post-traumatic stress. Yet Alessa’s battle with it, and with the monsters that represent it, matched everything I’ve seen about approaches to mental health.

Broadly speaking, I’ve seen two approaches – coping and rebuilding. They can be used together and support each other, but they function in different ways.

Coping is about finding ways to get through the day despite what’s ailing you. In Alessa’s case, it’s about building routines, finding friends to support her, naming the bones in her head. It’s about avoiding the monsters and learning to live despite knowing that they’re out there, both in the darkness and in her mind.

Rebuilding is harder. It means facing the roots of what’s bringing you down. It’s long conversations with professionals and friends about topics that can seem unbearable. It brings long term benefits by building healthier foundations for a mind. But in the short term it can make everything harder to cope with, digging up old hurts and unrecognised difficulties, unravelling malformed coping mechanisms. It’s scary and it’s not something everyone can face.

In Alessa’s case, the trauma monsters make the process of rebuilding very real. Alessa has the chance to literally face her demons, but she has to decide whether that’s the right path for her, as well as how to deal with the darkness when she faces it. And she has to decide who she can trust, whose advice will help and whose will lead to disaster. Because facing monsters, like digging into your own emotional baggage, can be self-destructive if it goes wrong.

Hiding from the Darkness

As someone who’s spent years facing depression, I felt a lot of empathy for Alessa when she wanted to curl up and hide from the world. That created a connection that carried me into a story about how to move on from there. It was dark and intriguing and made me think about people I know and the choices we’ve made about our mental health.

Few genres can match horror for bringing the subconscious into the light. It’s good to see the genre exploring what happens when that darkness lies exposed, how we move on from there.