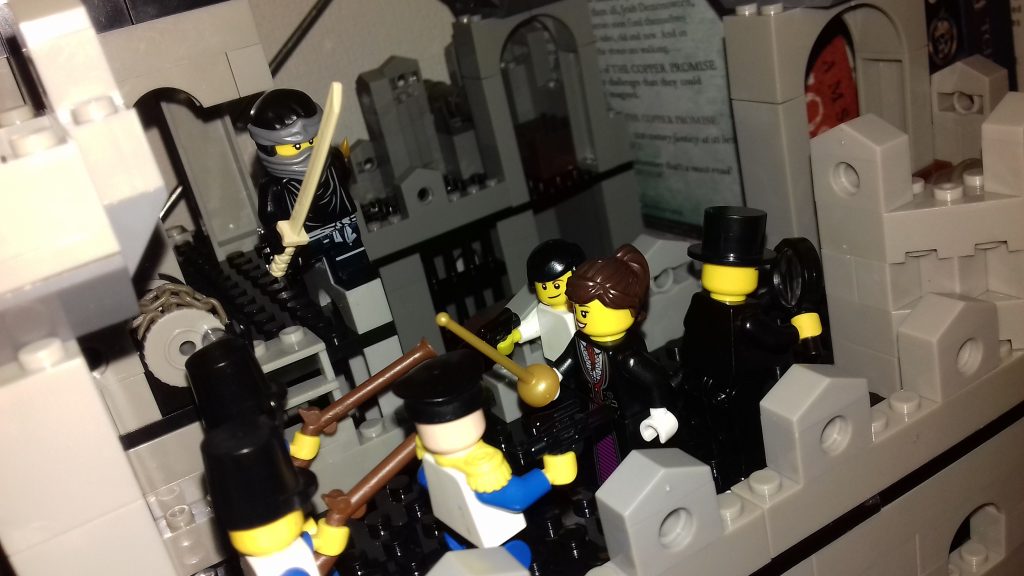 It’s editing time, and I’m back to building characters out of Lego to keep me motivated. It might not be the most productive tool for writing, but if it keeps my head in the story then it’s something, right?

So here we have the adventurers of the Epiphany Club fighting invading soldiers in a German castle. If only Sir Timothy was paying attention!

I’ve been playing with Lego a lot recently. I could pretend it’s because Ever-ready, my four-year-old niece, likes to play with it whenever she comes around, but that would be a lie. I’ll sit for hours on a Friday night, crafting fantasy townscapes and steampunk flying machines out of little plastic bricks.

OK, you say, but what’s that got to do with writing?

Imperfections. Irregularities. Things that don’t quite match. That’s the connection.

As I started paying more attention to Lego, to how the sets were designed and what other people created with them, I realised that the most impressive builds feature deliberate imperfections. A light grey wall with a few dark grey bricks. A wooden bridge where one plank is a little too short. A castle with one mismatched tower.

These are the details that bring a creation to life, and it’s the same in a story. Following the rules of grammar is good, but breaking them occasionally for dramatic effect can be fantastic. Writing a character as a hardened combat veteran can lead to interesting stories, but that one moment when it turns out they collect My Little Ponies is what will bring that character to life. If everyone has turned against your main character, including one exception can make things seem more desperate, because it seems more real.

So throw in a dark grey brick. Build that triangular tower. And maybe go play with some Lego, because it’s a hell of a lot of fun.

I’ve been making Lego models of my books again. This week, a scene from Victorian steampunk adventure Guns and Guano, available for free from Amazon and Smashwords.

Continuing my new hobby of making scenes from my stories out of Lego, this week’s production is from the story ‘Leprosaria’ in my fantasy short story collection By Sword, Stave or Stylus, which is free on Amazon today – why not go download a copy and find out how Sir Richard got into this mess.

Continuing my recent hobby of illustrating my stories using Lego, here’s a scene from my upcoming Victorian action novella, Epiphany Club 1: Guns and Guano. When ninjas infiltrate the library of the prestigious Epiphany Club, adventurers Dirk Dynamo and Sir Timothy Blaze-Simms find themselves fighting for their lives and for an ancient artefact.

I bought certain Lego sets just to make those ninjas, that’s how much fun I’m having with this!

Guns and Guano will be out by the end of March, and free on Kindle as soon as I can arrange that. An adventure story flavoured with steampunk and fantasy, it’s the first in a series I’m bringing out this year, and it reads something like this:

I’m in the last throws of editing, and more news will follow as soon as I have it!

I love Lego. I love telling stories. What better way to combine my passions than by building Lego models based on my own stories? So here’s my depiction of gentleman adventurers Dirk Dynamo and Sir Timothy Blaze-Simms battling the preserved head of Leonardo da Vinci. Da Vinci has been lurking for centuries in the sewers below Venice, perfecting his army of automata and preparing to take over the world.

I had great fun doing this, and will definitely make more. Next time ninja!

The full story of ‘The Secret in the Sewers’ can be found in my steampunk short story collection Riding the Mainspring, free to anyone signing up to my mailing list.

One of the things I love about writing challenges is the different ways people interpret the same brief. It’s fascinating how our minds go in different directions from the same starting point.

My friends and I went through a similar experience last week when I set them a Lego building challenge. It was:

Build a Lego spaceship called the Terrible Turtle, to whatever scale and style suits you. It has to have:
– space for at least two crew
– a secret compartment
– some obvious propulsion system

And here were the results:

First up is Dr Nick’s Terrible Turtle. Dr Nick had an edge on the rest of us, as he’s a naval architect, so pretty expert at ship design. But he’s also a very busy man who ran out of time for a big build, so made the most of ‘whatever scale suits you’. I like how much you can evoke with so little Lego, like when the perfect word tells you everything about a scene or character. Also the lasers are firing, which is cool.

The next Terrible Turtle was designed by Matt, who does cool illustrations as Monkey Ghost Presents, which you should all check out. It turns out he’s also something of a perfectionist, who got really into working out how to make functional landing gear. This picture doesn’t quite capture the full majesty of those mechanisms, but does show what a sleek, functional minifig-scale ship he came up with. I also like its backstory, in which it’s made up of parts from different ships. Thinking about the history of places and characters can help inspire interesting details, in writing as in Lego.

Last is my own entry. If you’re thinking ‘that looks like half a castle stuck on top of a frisbee’ then you’re not far wrong, as I didn’t check whether I had ship-shaped bricks before setting the challenge. Still, there’s a detailed engine under the hood and a secret compartment under the captain’s cabin.

Being a writer, I of course got into thinking about characters too, and assembled a distinctive crew. They may not be the heroes this universe needs. In fact, given that they’re drunk in charge of a spaceship, they’re probably not heroes at all. But I had fun inventing them.

If anybody reading this feels like assembling, drawing, writing about or otherwise presenting their own take on the Terrible Turtle I’d love to see it. But for now it’s Saturday, and I’m off to play with my Lego.

Have a fun weekend!

I can’t say the last few weeks have been as quiet as the blog. Laura and I have had three Christmas celebrations, two stays with my brother and his family, and one gaming convention, all in the space of a fortnight. I’ve eaten and drunk more than is healthy, exercised less than I should, and generally enjoyed letting it all go for a couple of weeks. 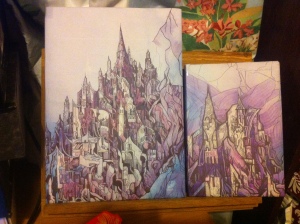 Hopefully by tomorrow I’ll have something more coherent to say than ‘look, I’m still here!’, but I’m still fighting through the junk food fatigue, so for now that’ll do.

Hope you all had a great holiday. What were your highlights?

I went to see the Lego movie this morning. It was everything I hoped for – weird and wild and full of visual fun.

The film’s pretty clear in its underlying message – don’t try to fix everything in a sterile image of perfection, let life be messy, chaotic and fun. Near the end an unexpected plot and stylistic twist turned this from what you might generously call subtext to a full on out loud message about how people should play with their toys and with each other. That might sound like it trampled over any subtlety the movie had, but actually it worked. Despite the moral sledgehammer they were wielding I found it charming. The fact that it was tied to a visual shift and story twist really helped. (Sorry if I’m being a little cryptic, I’m trying not spoil the film.)

Sometimes the subtext can become the text. Sometimes it’s OK to just throw subtlety out the window and go ‘hey, here’s the message of my story!’. That’s particularly true when writing for children, but I think it applies with adults as well. If you do it well enough you can get away with that kind of thing. The risk is that doing it badly will really put people off your stories.

I heartily recommend the Lego movie. It’s awesome fun. And maybe it’ll inspire you in your own creative acts as well – something this wild and exciting really should.