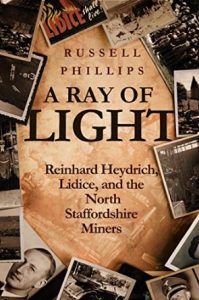 My friend and writing support Russell Phillips has a new book out this week, A Ray of Light. Normally, when I’m writing about a book by someone I know, I just say “hey, here are the things I like about it, maybe you will too”. But this time I’m going to go further. This time I want to encourage everyone to go pick up this book, or at the very least read up about the events it describes. Because this book exists to help us remember terrible things from the past, and to hold out hope through the way we respond to them.

In June 1942, Nazi troops occupying Czechoslavakia destroyed the mining village of Lidice. The men were killed. The women and children were taken away, many of them to die. The village was so thoroughly destroyed that nothing remained to mark where it had been.

This atrocity came in response to the assassination of Reinhard Heydrich, the head of the Gestapo and one of the leading planners of the Holocaust. That Heydrich had acted monstrously, leading the murder of millions, is beyond doubt. The value of his assassination, on the other hand, is more questionable. Thousands of Czechs died as a result of his death at the hands of British-trained Czech agents. When Lidice was mistakenly linked to the killing, the village was wiped out. While Heydrich’s death was celebrated among the Allied nations, many in Czechoslovakia questioned whether it was worth the cost.

Lidice’s memory did not die. As Phillips discusses in his book, people around the world were shocked by the atrocity and acted to preserve Lidice’s memory. In particular, miners from Staffordshire in England strove to remember Lidice and help in its rebuilding. Out of the darkness came a ray of light.

Phillips’s short book describes Heydrich’s career, the planning of the assassination, the atrocities that followed, and how Lidice was remembered. It’s important that we remember events like this, not just for how terrible they were, but for how terrible moments can emerge from such seemingly innocuous beginnings as the childhood persecution of Reinhard Heydrich and the legitimate desire of Czech exiles for vengeance on the man persecuting their people.

You can find links to buy A Ray of Light from Phillips’s website. If it’s not your sort of book, then please instead take a few minutes to go and read about Lidice. It’s something we should all remember.