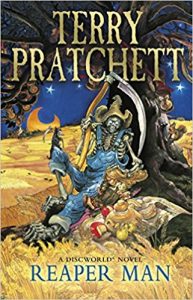 One of the great joys of Terry Pratchett’s Discworld novels has always been how life-affirming they are. Pratchett loved to remind readers of how amazing it is to be alive and encouraged us to make the most of it. That theme is at its strongest in Reaper Man.

Reaper Man starts with a very Pratchett premise. The character of Death, the anthropomorphic embodiment of how all things pass, has been changing. He’s becoming more of a person. The powers that be are unsettled by this and so fire him. It’s a comical mix of grand fantasy and mundane bureaucracy.

Removed from office and given a limited lifespan of his own, Death goes to find a place for himself in the world. He settles down on a farm, takes up work as a field labourer, and makes friends with his employer and neighbours. The very thing he was fired for – becoming more human – becomes the focus of his existence.

Meanwhile, across the world, people are failing to die. Life energy is sloshing around, causing chaos. Nowhere is this more true than in the ever-chaotic city of Ankh-Morpork.

The most emotionally engaging strand of this story is the one that most clearly hammers home Pratchett’s central theme – Death’s new life. While living on the farm, Death gets in touch with his humanity. He learns about the little routines that make up people’s lives. The work, the meals, the jokes, the rounds in the pub, even the pleasure of sleep.

Seeing the world through Death’s eyes, these things are made new and strange. The odd quirks of humanity come to the forefront and are revealed again with fresh eyes. Death gives us, as readers, the gift of seeing our lives anew, noticing how odd, beautiful, and joyful they can be.

He gives us a fresh perspective on ourselves.

Stopping for the Small Things

Death’s life also gives us reason to re-examine the way we live.

As he spends his suddenly limited time in the world, Death doesn’t just rush from one task to the next. Because everything is new and wonderful, he takes the time to enjoy it. We see him pausing over the little things, enjoying the moment even if it’s mundane.

It’s something we’re far better at valuing in principle than in practice. How often do you actually stop to enjoy a sunset, to gaze out at the countryside, to just take a deep breath and smell the coffee or the roses? It’s easy to feel as though, because life is limited, we should be making more use of that time, cramming more activity into every second. But when you do that, do you really get to experience the small pleasures? Or are you distracted by the fifty-seven other things you’re doing at once and the long list of tasks you feel you should do next?

Death can be an example to us, a reminder that it’s just as valid to stop and enjoy these moments. Life won’t fly away any faster for it, and in stopping for that moment, we get to truly appreciate what we’ve got.

The Glorious Variety of Human Life

Once you focus on that theme of enjoying life for what it is, the rest of the story gives us a different angle. The characters we meet in Ankh-Morpork are a reminder that humanity isn’t perfect, but that isn’t a reason not to appreciate it. From the bullish Mustrum Ridcully to the increasingly nervous Bursar to the eccentric medium Mrs. Cake, each contains a mixture of brilliant and exasperating characteristics. They are both flawed and wonderful. They’re fun to spend time around as a reader, and that’s a reminder that the people in our lives work the same way. None are perfect, but that doesn’t mean that we shouldn’t stop and appreciate the time we have with them.

Coming back to Reaper Man after Pratchett’s death, there’s an inevitable extra sadness to the story. But there’s a joy to it as well. The story reminds us to make the most of life and the people we share it with. If Pratchett lived the way his books call upon us to do, then it was a life well lived, his death the final full stop on a beautifully written story.

Let’s hope that Reaper Man can remind us to live the same way.