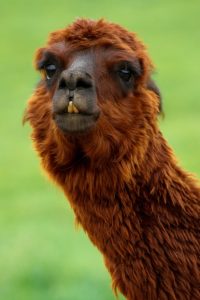 There were strangers at Camajamarca. Everyone had heard about them. Some said that they were guests of the emperor, travelled from far distant lands. Others said that they had defeated the emperor’s army in battle and taken him captive. Pascac found that hard to believe. He had seen the emperor’s army when it passed through two months before. Thousands of warriors with cotton armour and war clubs, flanked by jungle savages with their bows and arrows, the Emperor Atahualpa at the front, riding upon his litter. There was no way that army had been defeated.

What mattered was that there were strangers and royal officials at Cajamarca. People to whom Pascac could sell his potatoes.

He led his llama up the hill towards the town. The creature swayed from side to side as if dragged about by the weight of the baskets of potatoes. It was always making a fuss, that llama. That was why he called it Buggerfluff – because it was fluffy and it was a real bugger.

He was getting close to Cajamarca when he saw the first people on the track. Some were nobles, with fine gold plugs in their ears. The others were strange to look at. Their chests appeared to be clothed in large, shiny shells. Their skin was pale and their legs wrapped in cloth. Two of them were carrying long carved sticks with metal along the top.

Pascac grinned. The local varieties of potatoes were particularly good. He bet these strangers had never tasted their like. Who knew what exotic trinkets they might trade for them?

Suddenly, the rope in his hand stretched taught. He looked over his shoulder to see Buggerfluff standing in the middle of the path, eyes fixed on the strangers. The llama’s nostrils twitched.

“Come on.” Pascac tugged at the lead but Buggerfluff refused to move.

Five minutes of straining later, Pascac had given up on dragging Buggerfluff up the hill. Instead, he tied the llama’s lead to a tree, took one of the baskets, and headed up on his own.

Soon, he was puffing and panting beneath the weight. As he approached, the strangers pointed and laughed. The courtiers just scowled at him.

Fine then. He wouldn’t sell the courtiers any of his good potatoes. He wasn’t in the mood to put up with anyone’s bad temper, however important they were.

Pascac approached the strangers. He put the basket down in front of them, picked out a potato, and held it up.

“Best potatoes this side of Cuzco,” he said. “You want to buy some?”

One of the strangers grabbed the potato and took a bite. He spat it out and made an angry noise. The others laughed at him, pointing to a fire over which they were roasting meat.Pascac couldn’t understand what the strangers were saying, but they seemed to be interested in his potatoes. One of them bent over the basket, peering at its contents.

Pascac couldn’t understand what the strangers were saying, but they seemed to be interested in his potatoes. One of them bent over the basket, peering at its contents.

“They don’t understand you,” one of the courtiers said, his voice dripping with disdain.

“It doesn’t matter,” Pascac said. “They like my potatoes.”

The courtier grinned. It wasn’t a pretty sight. “Yes, they do.”

Two of the strangers picked up the basket and started walking away.

One of the strangers said something Pascac didn’t understand. They all laughed. The ones with the basket kept walking.

“Hey!” Pascac waved his fist. “I’ll get the authorities onto you!”

Now the courtiers laughed too.

“Hey!” Pascac shoved the nearest stranger. “Give me back my potatoes.”

Two of the strangers lifted their oddly shaped sticks. The metal on the backs of the sticks seemed to be shaped into pipes. Pieces of burning string hung from the back. The men looked like children playing some silly game as they peered along the sticks at Pascac.

“Hey,” he said again, though less certainly. There was a menace in the way the men stood, despite the absurdity of their sticks.

One of them drew a blade. It was nearly three feet long, thin as a reed, and bright as silver in the sunlight. He pressed the tip against Pascac’s cheek. Just a little pressure drew blood.

Pascac laughed nervously. Now he understood why the courtiers looked so unhappy. They were used to being in charge, but how could they challenge a man with a weapon like that?

“Never mind, eh?” he said, trying not to shake with fear. “Keep the potatoes. I’ll get out of your way.”

He backed off. The sticks were still pointing at him. One of the stick-wielders spoke and pulled something back on his toy.

After a moment, the man with the blade shook his head.

Whatever that meant, Pascac was glad to get out. He turned and trotted back to Buggerfluff. The llama seemed happy to be leaving.

“Maybe I was wrong,” Pascac said. “Maybe they really have captured the emperor.”

As he headed for home, he tried to work out what that meant, for him and for the rest of the empire.