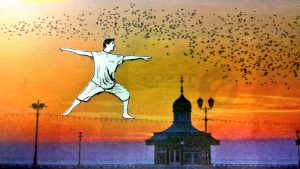 I sat at my window. The warm light of sunrise spread through the sky, its rich orange shining all the bolder against the grey sea below. The beach was deserted. I wondered what it would be like to walk there, to feel the sand between my toes, the damp beneath my feet.

But walking on the beach meant leaving the flat, and even through a sleepless night like this one, I could barely will myself to get up out of my chair. My sketchpad lay idle in my lap, paints and canvass gathering dust in the corner. As long as I did nothing I felt nothing. It was when I stirred that the dread came.

A movement caught my eye. At first, I thought that it was an early morning runner, made pale by some trick of the light. But he was not on the road or the beach. He stood with arms held wide, balancing on the wire along which lights were strung above the promenade. With smooth, careful movements he walked along his unusual tightrope.

The walker did not look real. His face and clothes were all white as paper. His features seemed draw on in crude ink. Yet he was the most real thing that I had ever seen.

By the time he descended from the wire and disappeared, I was smiling like I hadn’t in months. I opened my sketchbook, sharpened a pencil, and set to work.

Every morning, the tightrope walker was there, stirring me back to life.

The first time I painted all day before collapsing exhausted. After a week, I managed only the mornings. Soon I was down to an hour each day. As the vivid memory of the tightrope walker faded, so did my passion for life and for art.

I knew the power of art. If I could capture the essence of that fleeting moment then its inspiration could carry me through the day. And so I sat one morning, pencil in hand, watching the tightrope walker begin his journey above the lights.

A few swift strokes caught the outlines of sea and sky, lamps and pier. Then I set to work on the man himself. His arms, his body, his head, those legs which flowed with sure and artful movement along the wire.

He seemed more ephemeral than usual, like a ghost in the dawn. I hurried to draw him while I still could, but with each stroke of my pencil he faded further from the world. I cast aside my sketchbook and pencil, but it was too late.

The tightrope walker was gone.

Tears streamed down my face. Once I was empty, the numbness returned.

I hoped rather than believed that the tightrope walker would return the next day. Of course he did not. I had destroyed my own muse.

I looked at the empty wire, wondering what it had been like to be him. What it had felt like to have that wire beneath his feet.

If this was all I had, then I had to know.

Barefoot, feeling each sensation beneath me, I opened the door and stepped out for the first time in months. I felt the wooden boards of the hallway, the rough edges of the steps, the uneven tarmac of the much-repaired pavement outside my block of flats. I felt cold metal against the insides of my feet as I hauled myself up a lamppost, balanced precariously on the back of the streetlight, and prepared to set foot on the wire.

Then I saw a figure in a window, sketchbook in hand, staring numbly out at the world.

I placed my foot on the wire and started to walk.

This story was inspired by a picture I created in an art class. I didn’t make it with a story in mind, but whatever I was doing, it tapped into something. Sometimes you really can be your own inspiration.

As for the rest, I’ve suffered from depression. No, strike that, I do suffer from depression, but I’m much better at managing it now. I know that feeling of dread at facing the world. It can be crippling and there aren’t any quick fixes, but moving past it really can be about finding your own best self.