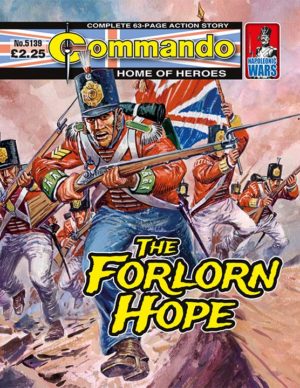 I have a new comic out now, courtesy of the fine people at Commando.

The Forlorn Hope is the story of Tom, a young ne’er-do-well who drunkenly signs up to fight in the Napoleonic wars. Sent to Spain, he struggles to escape his new life of hard work and danger. But as the redcoats are thrown into a series of bloody sieges, Tom has to decide what sort of person he really wants to be.

Like my previous Commando story, The Forlorn Hope‘s characters are fictional, but the events they’re caught up in are entirely real.

During the Napoleonic Wars, the British army expanded hugely to face the might of the French Empire. To get enough men, recruiting parties scoured the country, often relying on drink to make men susceptible to exaggerated promises of pay and adventure.

The unit I put Tom into for this story is a real one – the 45th Nottinghamshire Regiment. The events of the comic cover actions they took part in, including the bloody storming of Badajoz. The details of the fighting are as close to the truth as I could make them, down to the moment when a grenadier named MacPherson turned his red jacket into a flag. I’ve skimmed over the uglier details of the aftermath, as they seemed out of place in Commando, but the moment when the victorious British immediately start drinking reflects the real behaviour of Wellington’s army.

As for calling assault parties “Forlorn Hope”, that’s also real, though its original meaning isn’t what you might expect. The phrase arose during fighting in the Netherlands. It’s a corruption of the Dutch phrase “verloren hoop”, literally meaning “lost heap”. So a similar sentiment but with a different meaning. It’s a fitting description. Many men were lost in the assault parties sent to storm besieged towns and forts. It was a difficult, dangerous business, and it was with good reason that the survivors were held in high regard.

You can find Commando #5139: The Forlorn Hope in British newsagents now and in digital form via Comixology.