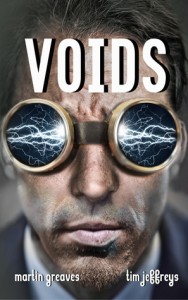 Science fiction novella Voids by Tim Jeffreys and Martin Greaves isn’t a cheery read. The title says it all – this is a story about the absences in people’s lives, the chasms left when something of value is lost. Yet it’s not hard going, the pace and writing carrying you through a sad but worthwhile tale.

Population problems are a common feature of social science fiction, as we face the fear of an over-crowded planet (Public Enemy’s less well-received follow-up album). The sort of laws society might use to tackle this come up, and often appear draconian. Voids handles things more subtley.

Danny Seraphine is a sterilisation agent. He hunts down runaway fathers who are dropping kids left right and centre then not taking responsibility for them. Once he finds them he stops them carrying on that way, courtesy of his sterilisation gun.

When I started reading the story, I feared this was going to turn into a preachy story about individual liberty, in which Danny learns the error of his ways and joins the resistance. Instead, the subject is tackled more obliquely. Danny just gets on with his job. We see political opponents, and they don’t come across well, but neither are the sterilisations left unchallenged. I didn’t feel like the novel was passing judgement on this way of tackling social problems. It just put it out there and explored some of the consequences.

The exposition wasn’t perfectly smooth – I’m not a big fan of the big exposition dump – and used a few longer paragraphs of dialogue unconvincing enough to annoy me. But it’s rare for any story to avoid a red mark on my anti-exposition meter, I’ve read books from big names that were worse for this, and the few exposition problems stopped once the story got into its stride.

That might make this sound like a cold, abstract story, which it isn’t. Part of the reason the setting’s morality isn’t grappled with directly is that Danny faces more personal problems. His marriage is falling apart. He’s haunted by the memory of their stillborn child. His wife desperately wants a child, but Danny’s reticence and fear of sterility hang over them. And then there’s the fear behind that reticence, as Danny considers his own past and how it has shaped him.

All of this hit me right in the feels. Over the past six years, my wife and I have dealt with the difficulties of conception, the grief of miscarriage, grappling with our own psychological pasts, and eventually the sadness of separation when things didn’t work out. A lot about Danny’s life struck a chord with me, and I felt that it was handled sensitively, not exploiting the emotions these things bring, but teasing them out for readers to explore.

As a result, I can’t guarantee that this novella will strike the same emotional chord with others that it did with me. But personally, I thought that Danny’s experiences made for a compelling and moving story. By making the story personal, Greaves and Jeffreys were able to open up the theme of their setting without beating readers over the head with it.

This seems to be the year when I’m going to get into novellas. As I said when discussing David Tallerman’s Patchwerk, stories of this length are increasingly common, as changes in publishing expand the possibilities for what can be sold. Voids was the perfect length for the story it had to tell – long enough to go into depth and have real emotional punch, but not so long that it out-stayed its welcome. Patchwerk wrung more excitement out of its literary sprint, but Voids opened up emotional issues that society often sweeps under the carpet, handling them with great deftness. At eighty pages long, it’s well worth the time it takes to read.

Apparently this is also the year of disclaimers. Tim Jeffreys sent me an advance copy of Voids after I was involved with another of his projects. But as I’ve said before, if I don’t like a book by someone I know then I won’t make up good stuff – I just won’t write about it here. This blog is my happy space!

And remember, my new book A Mosaic of Stars, collecting together over a year’s worth of weekly short stories, is out now on Kindle. It’s only 99c for the first week, so go make the most of the bargain.