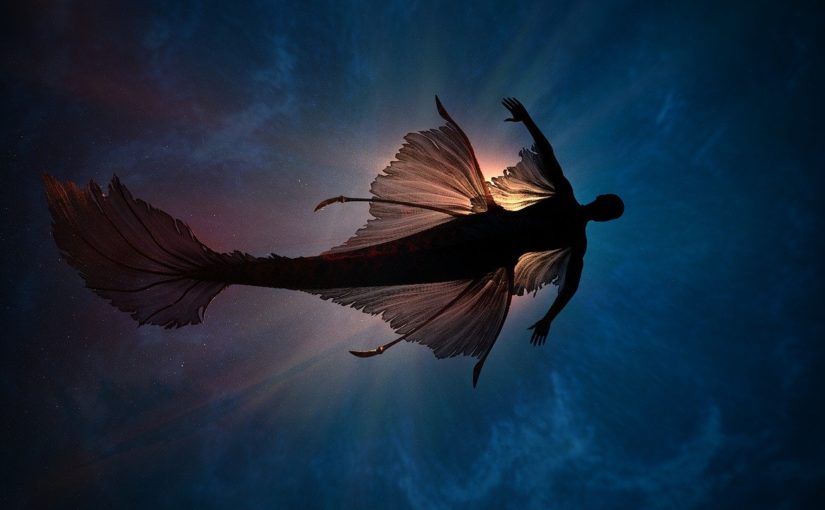 Aunt Hella rushed up the road to our front step, where father and I were fixing fishing nets.

I leapt to my feet, hooked like a fish by the tone of dread with which she said mother’s name.

Father and Hella rushed down the street, clogs clattering against the cobbles, and I ran barefoot after them, over the bridge where the river ran red from the big city die works, through town and down to the quay.

Mother’s boat sat at anchor a dozen yards off shore. It shouldn’t have been. She had sailed out on the tide just after dawn, heading away from the murky waters by the river mouth, towards the distant waters where the big shoals of cod swam. We had seen her more when the waters were cleaner and her days shorter, but as father said, we all have to make sacrifices.

People were swimming in the water around the boat. One of them flipped over and I saw his tail rise from the waves.

A mermaid was swimming towards the quay.

My heart beat so hard it hurt. The merfolk seldom came to shore, except when they rescued boats lost in storms or sailors fallen overboard. They preferred to live separate from us.

But this mermaid wore a look of anger, not pity.

“We have taken the people from your boat,” she said.

“Why?” my father asked, clutching the leather marriage band around his wrist.

“We will keep them until you make the water clean again. If it becomes any dirtier, we will start to kill them.”

“We’re not making the water dirty!”

“Yes you are.” The mermaid pointed towards the red running from the river mouth.

“That’s not us. That’s the dyers in the big city. Please, don’t hurt our families for this.”

“Humans did this. Humans must fix it.”

As she swam away I felt like a mouse caught in the claws of a hawk. They had my mother. They were going to kill her.

I ran to the edge of the quay and leapt off. My father shouted in alarm, but I was already in the water, the splash of my landing drawing the mermaid’s attention. She watched as I swam towards her with a child’s clumsy strokes, my simple smock clinging to my skin.

“Please!” I said, spluttering through the water as it rose over my mouth. “Let my mother go. We can’t fix this. She didn’t do this.”

“Send a message to the people who did!”

She turned and swam away, far faster than I could follow.

My father grabbed me from behind, hooked his arm around my chest, and dragged me kicking and weeping towards the shore.

That day, as I stood dripping on the docks amid the silence of a stunned community, I swore that I would get my mother back, no matter what it took.

For weeks my father watched warily, half expecting me to swim off out to sea on some fool rescue mission.

But I knew better. The merfolk were right. This wasn’t their fault. It had to be fixed on land.

I stopped skipping school to earn pennies sweeping up fish guts. I spent summer evenings with pen and paper, practising my words. I wrote letters to the dyers, then when they wouldn’t listen to the big city councillors. When a newspaper started, I wrote to them too.

A year passed. The water was no cleaner or more dirty. Once a month, grim-faced merfolk brought greetings from our kidnapped kin, a reminder of what was at stake. Our fishermen started takes weapons with them to sea.

I roamed the coast, rallying support in other towns and villages, people who understood the anguish of losing family to the sea and who saw the merfolk’s pain.

More years passed. We formed an association, wrote a petition, raised funds to pay for a lawyer. Still nothing changed.

And then, last week, the river ran black. The worst was happening.

We still had funds in our collection. I went to a friend who works at the quarry and bought all the blasting powder I could.

It’s never enough to say that something has to change.

And so I say, I’m going to change it.