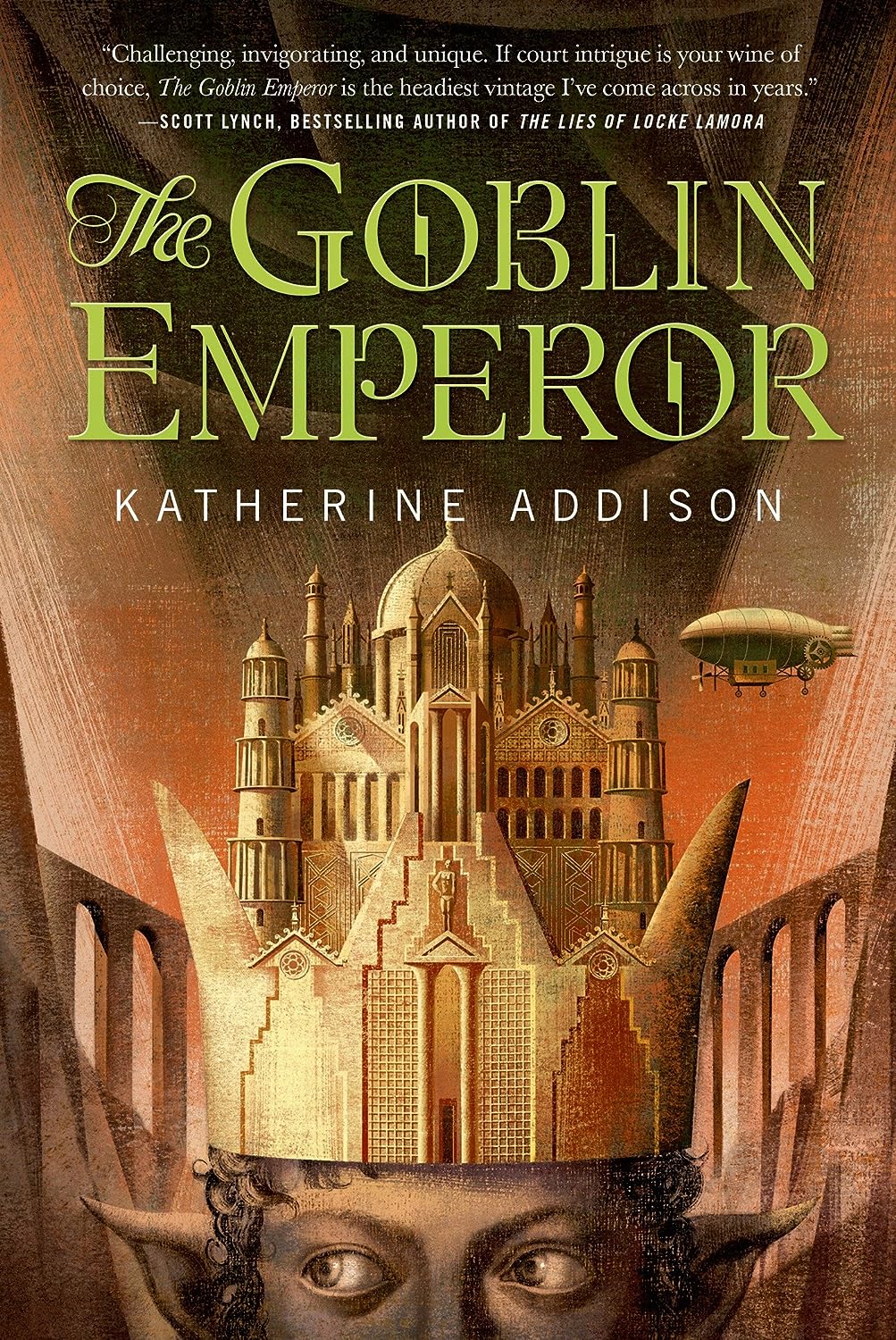 A lot of fantasy set in secondary worlds, ones entirely detached from our own, tends to be action packed. Think of the grand quest of Lord of the Rings or the battles, chases and duels of Games of Thrones. I like that action, but it’s nice occasionally to find a book the breaks the pattern and takes a more contemplative approach to such a setting. The Goblin Emperor by Katherine Addison is such a book.

Relying on Sympathy, Not Strength

The Goblin Emperor is the story of Maia, a young half-goblin son of an elf emperor. Maia has grown up in exile, ignored by his father and the court. But when the Emperor and his other sons die in what at first seems to be an accident, Maia is propelled to the throne. The story revolves around how Maia struggles with his new position, both politically and emotionally. His life is suddenly better, but a lot harder and full of risks.

Maia is a great character to centre a book around. He’s only eighteen years old and a fish out of water, not particularly strong physically and only just starting to find any strength of character. The situations he’s put in would be difficult for almost anyone, and that makes his struggles with them very human, drawing the reader in through sympathy. The fact that he doesn’t understand how the court works also creates excuses to explain things to readers.

The most obvious books to compare this to are Mervyn Peake’s Gormenghast trilogy, starting with Titus Groan. With their intense atmosphere of intrigue and incomprehensible ritual, the Gormenghast books evoke that sense of a court as a bewildering place held back by centuries of tradition. I loved those books when I first encountered them, and my mum still has a photo of seventeen-year-old me sat up an apple tree in my grandma’s back garden, completely indifferent to the real world, lost in Peake’s imagination.

But what Gormenghast isn’t is accessible. The language is rich but challengingly dense, the pace slow, the characters mostly unsympathetic. The Goblin Emperor achieves a similar, though slightly less intense atmosphere, while being far more accessible. We’re thrown into an intriguingly complex and inaccessible world, but Addison’s writing and Maia’s company carry the reader through with ease.

This being a book about a court, the plot revolves around intrigue, and that’s probably its weakest point. The plot is good, but it doesn’t twist and turn in the way I’d hoped it might. Characters and their motives usually remain what they first appear to be.

That said, this allows a greater degree of optimism than in a book such as Titus Groan or Guy Gavriel Kay’s Lord of Emperors. From early on, Maia makes small positive changes to the lives of those around him, and aspires to larger changes in a way that’s hopeful but not unconvincing for the setting. A tension remains over whether he’ll maintain this trickle of positive change in a tradition-bound court, or drown in a reactionary tide.

Allowing the Heart to Sing

I really enjoyed this book. Though the plot achieved neither sudden turn-arounds nor the sense of crushing inevitably present in Peake and Kay’s courtly works, it had another sort of emotional engagement. It presented Maia in an incredibly personal, accessible way despite the impersonal nature of the setting. It balanced optimism and sympathy with darkness and doubt. It’s the most accessible book in this style that I’ve read, and a very enjoyable one.