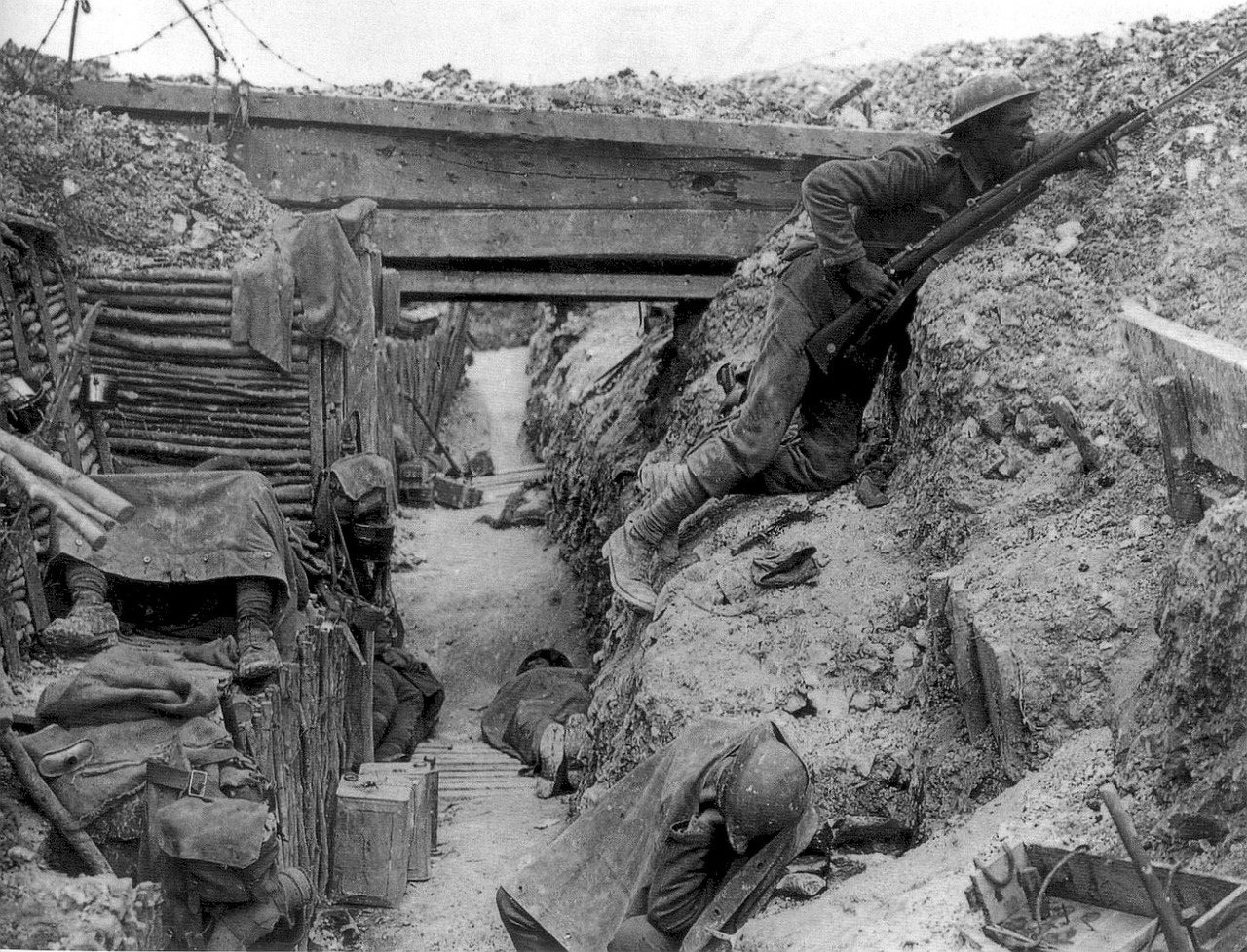 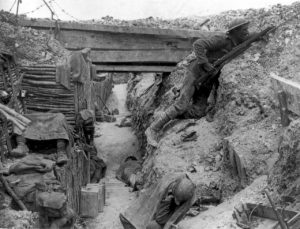 I woke with a start, sitting bolt upright on my lumpy, flea-ridden mattress. My head hit the bunk above me and I stifled a curse. In the surrounding darkness, the men of my company filling our dugout with the rumbling chorus of their snores.

I’d had the nightmare again. The one where the British stormed our trenches and I was taken captive. Mocked, beaten, scorned, an embarrassment to my family. Girls I had known back home pointing and laughing at me through the bars of a cage.

I swung my legs around to sit, hunched, on the side of my bed and laid a hand on my rifle. If the British came then I would not let them capture me, no matter what. Death before dishonour.

A stub of candle was stuck to a tin lid by my bed. I struck a match, lit the wick, and reached for my boots. If I couldn’t sleep then I might as well go up to the trenches and help keep watch.

Before I could get my boots on, the roar of an explosion filled the air, shaking the room. The sound of it drove the breath from my lungs. At the far end of the dugout, roof beams gave way and the earth fell in, burying men in their beds.

Timbers groaned, creaked, cracked like God snapping his fingers. Dirt tumbled down the stairwell and into the room.

I rushed barefoot across the rough floor and peered up the stairs. They were filled with fallen soil and broken timbers.

Hans appeared beside me, dressed in only his underwear, a wild look on his face.

“We have to get out,” he said. “Before we’re trapped here forever.”

Some men came to us, while others dug frantically to rescue the buried men.

My skin crawled at a whole new imagined dread – the thought of being trapped not just in a cage but beneath the earth. My pulse quickened. Hans was right. We had to get out.

I grabbed a trenching tool and scrambled up the stairwell, the dirt cold and damp between my toes, until I couldn’t ascend any further. Then I started digging, hurling rocks and soil down behind me, opening a gap just wide enough for me to wriggle forward and keep digging.

Hans came up behind me and I could hear others behind him, shovelling the dirt back from one man to the next until it hit the floor of the dugout.

The ground shook again and I heard something fall. Dirt cascaded across my arms, almost trapping them.

“Faster!” someone yelled. “The whole place is going to collapse.”

I tore at the heaped earth with my digging tool, flinging dirt into the faces of the men behind me. My knuckles scraped against fallen boards and rocks. Dirt filled the grazes. Pain flashed and my heart raced.

My hands burst through a last layer of dirt and into air. I writhed out of the fallen earth and into a clear stretch of stairwell. Above me, I saw a rectangle of grey dawn sky.

I laughed, turned, and started digging again, trying to make a way through for the others.

There was a roar and I was flung from my feet. The walls came crashing down on top of me. I was swallowed into the darkness of the earth.

I couldn’t breath. Not just couldn’t reach the air but couldn’t move my lungs. I strained, trying to force air down, got only a mouthful of dirt. Panic gripped me and I would have sobbed in pity for myself if only I could have made a sound.

Desperately, I strained with my right arm, forcing fingers through the weight of dirt. They found the broken edge of a plank and I gripped it tight, trying to ignore the splinters piercing my palm as I heaved with all my strength. My body moved an inch, then another. I forced my other arm around, like swimming in slow motion, and took hold with that hand too.

My head was spinning, my chest burning. Muscles trembled as I pulled on the plank, dragging myself higher.

The dirt loosened. My chest heaved. I drew in air as well as dirt, but still it wasn’t enough. Muscles trembled as I tapped into the last of my strength.

Writhing and twisting, I worked my way up through the ground until my arm burst out into the open air. Moments later, I slithered snake-like from what had seemed to be my tomb and lay panting on the ground.

The world was filled with shouting, strange men using unfamiliar words. One appeared at the mouth of the stairwell, only a few feet away. He pointed his gun straight at me, a figure out of my nightmares, ready to drag me off into captivity.

I laughed and flung my hands up.

How sweet it was to breath again and to know that I might keep on breathing. 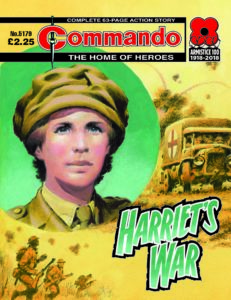 Harriet’s War, a comic I wrote set in the First World War, is out next week, so it seemed like a good time to return to that era.

I’ve written before about the attack on Messines Ridge, when the Allies triggered the largest non-nuclear explosion in military history. In To Win Just Once, I showed that action from the perspective of the New Zealand troops attacking the ridge. Ever since then I’ve been fascinated by the awful idea of what it would have been like to be on the other side, among the ten thousand Germans killed or buried alive in the explosion. This story is about that.

If you enjoyed this story then you might want to sign up for my mailing list. You’ll get free flash fiction straight to your inbox every week, as well as updates on my other releases. And watch out next week for more about Harriet’s War.

This Thursday, my first story for Commando Comics hits the newsstands and the Comixology app. I’m very proud of this story, titled “To Win Just Once”. I thought I’d put some notes here to give readers more information about the story.

The battle portrayed in this story is a real one. The assault on Messines Ridge was one of a series of battles fought around the town of Ypres. This was some of the most heavily contested territory of the war and the whole area was left devastated. You can read more about the battle in this article I wrote for War History Online.

The British Army in the First World War wasn’t just made up of people from Britain. Soldiers from across the empire and former imperial territories fought for the British. Australia, Canada, and New Zealand sent thousands of men to Europe. The Canadians were so feared by the Germans that the British created bluffs about where they were being fielded. Men from the Australia and New Zealand Army Corps (ANZAC) fought in some of Britain’s most difficult campaigns, including the disaster at Gallipoli.

One of the most dramatic details in this story is the explosion that destroys the German defences. This was also real. Engineers from the British Army dug twenty-one tunnels across no-man’s-land and filled the ends with a vast quantity of explosives. It’s the largest non-nuclear man-made explosion in history. Two of the mines didn’t go off, and those bombs remained buried to this day.

While the battle was real, the characters are not. I made up every single one, from frustrated infantryman Jimmy Wilson to Captain Chandler, the disdainful English officer. That said, they are meant as realistic portrayals of the soldiers present and their experiences. ANZACs really did suffer through the Gallipoli fiasco only to end up on the front lines. British officers were mostly from privileged backgrounds, and the respect they showed for their men, especially from the colonies, varied hugely.

I’ve based the general picture of the war on research I’ve done to write books and articles. Because of the bombardments, the area around Ypres was a hellish mess by 1917. The fighting was tough and brutal, bombardments heavy but ineffective. As a result, assaults were usually awful and futile for the attacking troops. Messines Ridge was one of the exceptions, as it was a success and the Germans suffered most of the awfulness.

I was inspired to write this story by reading about Messines Ridge for War History Online, and by Commando’s call for pitches about the ANZACs. I’ve written more scripts for Commando since, and am about to start writing for WHO again, so watch out for more announcements here. You can also get notice about upcoming comics, along with free fiction, but signing up to my mailing list.

And to end on an upbeat note, the title for this story is taken from a Saw Doctors song. I saw the Saw Doctors play live when I was seventeen, and it was one of the liveliest, most entertaining gigs I’ve ever seen. This song, with its positive message about enduring and finding your win, will be in my head forever. That’s no bad thing.