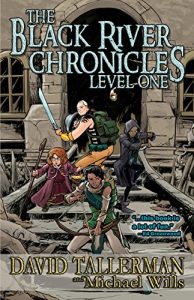 Editors often talk about the problem of roleplay games turned into fantasy novels.

But often roleplay games turned into written stories aren’t so great. What was massively entertaining as a game might not make a strong story. Emotional attachment can stop people stepping back and critically looking at their narrative. The derivative genre tropes that fill so many roleplay games can make for extremely derivative stories.

David Tallerman and Michael Wills’s The Black River Chronicles: Level One takes this problematic starting point and creates something more knowing. The protagonist is a trainee ranger at an academy for adventurers. Students go through levels as they are trained. Attributes such as intelligence and dexterity are graded on number scores. It’s as if the mechanics of a roleplay game came to life, not just the tropes, and the characters had to deal with the consequences.

Rather than be ruled by familiar tropes or do battle with them, this story embraces them. It creates something charming and a little offbeat, yet comforting and familiar. It’s light-hearted fun with likeable characters. Roleplayers will enjoy seeing the things behind the scenes of a roleplay game brought front and centre. Other readers might still enjoy the fantasy adventure – having roleplayed for over 25 years, I can’t muster the distance to tell. But if you’ve ever picked up a set of oddly shaped dice, rolled to hit, and wondered how much XP you’d get for killing the goblin, then this one’s for you.