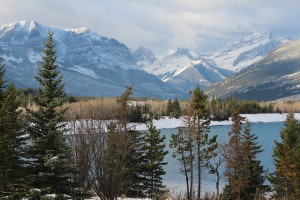 J R R Tolkien seemed to think that we go to America when we die. After all, at the end of The Lord of the Rings Frodo and others sail off into the west to eternal life in a beautiful land. Two of the fundamental underpinnings of Tolkien’s work were his Christian beliefs, including heavenly rewards for good people, and the idea that Middle Earth is a sort of pre-historic Europe, from which our modern myths originate. That ship leaving the Grey Havens, it’s taking people to heaven across the Atlantic.

OK, so I’m crossing the streams of Tolkien’s layers of meaning here. But it’s an idea that Paul Cornell ran with much more literally in ‘Ramesses on the Frontier’, his contribution to the mummy anthology The Book of the Dead. Ramesses I awakes to find himself in a rather unexpected version of the Egyptian afterlife, crossing the United States in search of his eternal reward. It’s a fun idea, and a quirky story.

But would I want the USA as the afterlife? As a Brit, I find that idea troubling. Sure, the scenery’s fantastic, but what would my chances be of getting a decent cup of tea? Not to mention the bread – it’s so sweet. And that’s before we even get into the noise and the lack of proper queueing.

No, if the afterlife lies to the west then I’m hoping it’s Canada. I hear good things about their donuts.

European mythology and sailing away into death also feature in my collection of alternate history and historical fiction stories From a Foreign Shore, which is free today and all this weekend on Amazon. If you enjoy fiction that reinvents the past then please check it out.