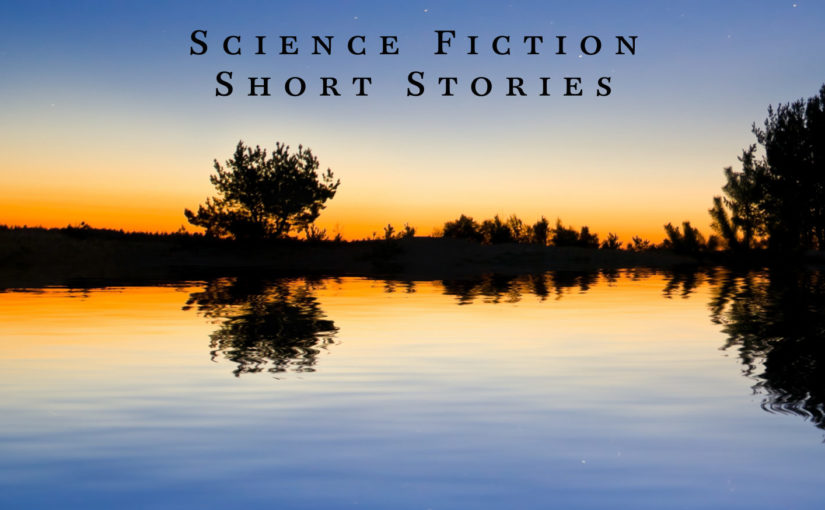 The sky beyond our starship was streaked with light. The bright beams of lasers, the blazing flowers of exploding warheads, the glowing wakes of crippled engines and flames tearing through ruined hulks.

My eyes watered from the acrid smoke. Breathing made my throat ache but it was better than the alternative, just like being on the bridge of the Remus was better than being anywhere else in the fleet. We sat at our stations, trembling hands working the controls that still functioned, caught in one last moment of defiance. If we could smell the burning systems from here then we would all burn soon.

“Fire everything you have!” Admiral Salter yelled. “Every beam and torpedo, every bullet and bomb. Make the bastards bleed!”

“We’re doing it, Admiral,” I replied, wiping the sweat from my brow.

“Then why aren’t the stars burning?”

I swallowed and forced myself to face him.

“The stars still blaze, Admiral. Their light is hidden by the battle.”

“Why don’t they blaze brighter, Tollard?” He glared at the red console above my station. “Why aren’t they bursting apart to swallow up this wretched mess? Why aren’t we going down by the light of the Never Bombs?”

I shrank from the intensity of his stare.

“What good will killing the system do?” I asked.

“It will teach others to fear the wrath of the Republic. You think we built this weapon to sit on it? Launch the bombs!”

Gripping the back of my seat, I stood to face him. A fearful, lizard part of my brain betrayed me, one hand reaching for the controls. Obedience had a power beyond thought, but I forced my hand back and forced myself to stand firm. My fingers gripped my sidearm tight, the bite of cold metal reassuring me of my body’s obedience.

Across from me, Gonda looked up from the shield controls, wide-eyed with shock at what was playing out. Her fingers darted across her console, redirecting the last dregs of energy, keeping our defences from collapse. I wasn’t going to waste these last minutes she had bought us.

The Admiral drew his sidearm and pointed it at me. Despite everything, the blackness of its barrel filled me with dread. When all you have is moments, they become more precious.

“Then stand aside and I’ll do it.”

I drew my own sidearm.

I heard a thud and felt pain rip through my shoulder a moment before my own finger tightened. My shot hit the floor and I fell, blood streaming across the deck.

I forced my shaking hand up, trying to aim for the admiral, but it was too late. In three swift strides he had reached my station. His foot clamped down on my forearm and he reached for the Never Bomb controls.

“If the Republic burns, then we’ll burn the sinners away too,” he said.

He flipped switches and twisted dials. A countdown began, sixty second to give a commander thought before unleashing total destruction.

Tears streamed down my face, drawn by more than the smoke. There was only one way out of this.

Every millimetre of movement filled with pain, I raised my wrist and pointed my sidearm. I squeezed the trigger. There was a thud and Gonda sprawled across the shield controls. A second shot smashed those controls apart.

Bright light blazed across the viewscreen.

“The stars are burning,” Admiral Salter said with a wide grin, oblivious to the clock running down behind him. Thirty seconds until the failsafe passed and he could launch the bombs.

Long enough for us to die.

Another flash and the screen went dead. A bulkhead gave way and smoke billowed onto the bridge.

“The stars are burning,” Salter repeated like a priest reading from the Great Verse.

I sank limp onto the deck. In the final moments, stars blazed across my vision, but the universe around me was safely dark.

Desi slammed the door shut behind them and slid a bolt across. Whatever was inside this old surgery, whatever it had been before the war, it couldn’t be more dangerous than what was out there in the ruins of Barcelona. Peering through a filthy window, he saw nothing moving in the street, but that didn’t mean they were safe. Some of the robots could fly. He’d heard some could tunnel.

By the time he turned around Carina and Javier had already disappeared from the waiting room, leaving a trail of blood. Desi dashed after them, gun still in hand, and found them in a treatment room. Blood was dribbling from Javier’s wounds down the sides of a couch.

“Look.” Carina turned around, the grey controller for a wall mounted device in her hands. “Proper medical equipment. We can save Javi.”

“Put that down,” Desi demanded.

“He needs this.” Carina peered at the machine, trying to work out how to switch it on.

“Stop it.” Desi grabbed the controller from her hands and flung it into the corner of the room. “It’s a machine. We can’t trust it. It could be on their side.”

With a groan Javier tried to sit up, then slumped back, the charred mess of his chest rising and falling with ragged, irregular gasps of breath.

“He needs this!” Carina snatched up the controller. “He’s going to die!”

“If you switch that machine on we might all die.” Desi pointed angrily at the device. “Have you forgotten what happened to Laia and Miguel? They thought we could use that old computer, and now they’re dead.”

“You’re killing him,” Desi snarled. “The more time we waste here, the less time we’ve got to find bandages or something else we can use.”

“Bandages won’t do.” Carina starting flipping switches. “He needs more than you or I know how to do.”

The memory of Laia’s burned body filled Desi’s mind. The smell had been the worst of all. She’d smelled so beautiful in life, but the stench of blackened corpse had made him vomit. All because that computer had told the robots where they were.

All it took was a squeeze of the trigger. Carina froze as the roar of the gun filled the room, the bullet burying itself in the wall.

“Step away from the machine.” Desi trembled with fear at the thought that he might hit her. He had to be strong.

Her face stiff, eyes burning with anger, Carina turned to face him.

From the couch, Desi gave a groan. His left leg twitched and blood misted his breath.

“I don’t want to die.” Desi was firmer now, his heart beat slowing to something like normal. “Not at the hands of some mindless, compassionless machine.”

“Compassionless?” Carina nodded toward Javier, his breathing becoming ever more shallow. “Do you have compassion, Desi? Or has it been written over with the programming of fear?”

Desi’s finger tightened on the trigger, anger driving him. How dare she suggest he was no better than a robot? He just wanted to live.

Javier coughed – a terrible, wet sound, the desperate noise of someone else struggling to live.

All the anger left Desi, replaced with a different determination. He lowered the gun.

This story came out of a game of Watch the World Die that Laura and I played a while back, in which we played out a robotic and environmentally driven catastrophe. If you like world building, story telling games or just thinking about apocalypses then I recommend trying out Watch the World Die. It’s quick, simple and entertaining in a dark way.

And if you’re looking for more science fiction then my collection of short stories Lies We Will Tell Ourselves is free on the Kindle today – please check it out if you enjoy scifi.