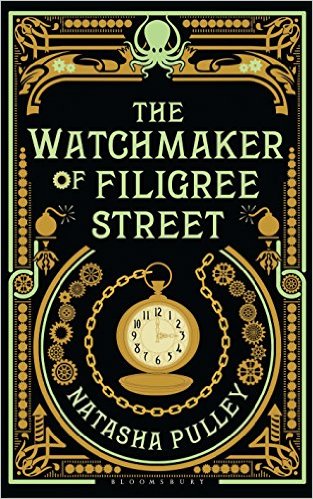 The Watchmaker of Filigree Street by Natasha Pulley isn’t the book I expected it to be. I mean that in a good way. What initially appeared to be a story of disjointed tone, combining restrained whimsy with a thriller-like plot of bombs and international intrigue, turned out to be something far more human, more coherent and more complete. Sure, there’s a clockwork octopus, mechanical birds, and the sort of details that bring Victorian London to life. But these aren’t what it’s really about. It’s about love, purpose and belonging. It’s about the difficulties of staying loyal or doing the right thing in a world where there aren’t clear cut rights and wrongs. For a while at the beginning, I wondered if it was even going anywhere, and by the end I was glad it didn’t have the sort of adventure story drive I’d expected.

I’m going to stay vague about the actual story. I feel like any description of it will either mislead you, as it misled me, or spoil the things that made me really enjoy this book. It’s about a clerk named Thaniel, the people he meets, and how that affects all their lives. In the gaps lie mechanical marvels, gaslit streets and light operetta. How’s that for a summary?

This isn’t the sort of high excitement story you might expect from its steampunk trappings and talk of terrorists. It’s a character piece that left me feeling raw and exposed, much like when I first finished reading The Great Gatsby. I’m not saying this is up there with Gatsby – very little is. But it drags a nail across the same exposed nerve of tension and tenderness, and that’s a thing to be admired. I’m very glad I read it.

On a slight tangent, this is one of several books I’ve picked up recently because I met the author at a convention and enjoyed chatting with them. It turns out that being a decent human being will sell your books, at least to me. It also turns out that it’s worth going to conventions, if only for the reading inspiration.