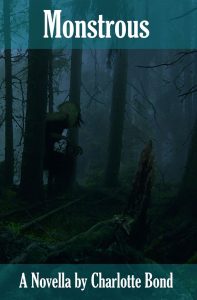 Reading Charlotte Bond’s Monstrous, I finally pinned down why humans are the scariest thing in horror.

I know that “people are the real horror” isn’t an original insight. It’s the central theme of The Walking Dead, and if it’s on big-budget TV then you know it’s not a new idea. But sometimes it’s hard to work out why something works.

Monstrous is all about this. The teenage protagonist Jenny is dragged off to join a commune by her mum. There’s something dangerous lurking in the woods around them, but the real unpleasantness comes from the people. It works incredibly well. One particular act of brutality (vagueness to avoid spoilers, go read the book), had me frozen with tension. It was just so awful and so real.

And that was when it hit me. In horror, the monsters can be more extreme, but the humans are more believable. What they do to each other has a sense of reality. That makes it scarier because it could actually happen.

Monstrous is about how humans are the real monsters. If you want to explore that particular brand of horror, I heartily recommend reading it. Just don’t expect to sleep well afterwards.