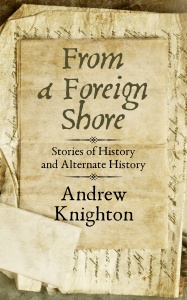 Olivia pushed her cart down the track, feeling each stone beneath her feet. Up ahead was a small lowland town, the sort where people kept their voices quiet and did what their lord told them. Hardly a place to start a revolution, but maybe one more she could connect in to the cause.

There was a wooden palisade around town, charred and battered by an English raiding party. No-one stopped Olivia as she walked in and set up shop in the muddy square, pulling out needles and thread, hammer and rivets, all the tools of the cobbler’s trade.

“What’s this then?” The man striding toward her was tall and stern, flanked by a pair of guards in chainmail. She knew him by reputation.

“Lord Fraser.” She bowed her head deferentially. “I’m just a cobbler on my way to Edinburgh. Hoped to drum up business here on the way.”

“What kind of Cobbler wears no shoes?” He glared at her bare feet.

“A poor one.” She didn’t say where her money had gone. Depending on his views, that could get her arrested.

Olivia’s stomach tightened as one of the guards leaned over her cart and start peering into bags. If he found her Bible, that one precious object on which she’s spent all her money, and if he realised it was a translation…

Fighting the trembling in her hands, she tore her eyes away from the cart and looked up at Lord Fraser. She took a deep breath. Perhaps she would get lucky, and he would be the contact she needed. Perhaps he’d have her locked up. But if he was going to find out anyway then better to stand by her belief than to try to weasel out of it.

“You’ll want to see this.” She rose, reached past the guard and took out the Bible. Heart racing, she handed it to Fraser.

“I see.” His voice was icy cold as he turned the page and saw it was printed in Scots rather than Latin. “Another Protestant plotter.” He slammed the book shut and glared at her. “The last thing this country needs is more plots.”

“The last thing this country needs is foreigners trying to tell us how to live.” Barely able to believe that she was talking to a lord this way, blocking out the terrified voice of panic in her mind, she nodded toward the town’s damaged defences. “Whether they’re Protestants or the Pope.”

Lord Fraser’s guards had closed in on her. One of them grabbed her arm. But then Fraser held up a hand and the man released her.

“This I should confiscate.” He held up the Bible. “But I also think it’s time I had my boots mended. And there’s no law against us talking while you do that.” He placed the Bible in the cart. “Let’s hope I don’t forget that when we’re done. Now, about my boots…”

The more I read about the 16th century the more fascinating it is to me. I’ve recently been doing some freelance work relating to Scotland in this period, which is where the subject of this week’s story comes from. Maybe another day I’ll write a story about a Catholic in the period, to balance things out a little.

This one’s for Olivia Berrier, who recently wrote a lovely review of my history and alternate history collection From a Foreign Shore on her blog. Please go check it out, and if you like what you read then you can get From a Foreign Shore for free today and all this weekend via Amazon.

And as always, if you enjoyed this story then please share the link or leave a comment below.