I enjoyed the first book in Stephen King’s Dark Tower fantasy series, with its broken narrative and its intriguing ideas. I loved the second volume, with its intense study of a small group of characters, their personal struggles and their developing relationships. So I was really looking forward to the third volume. 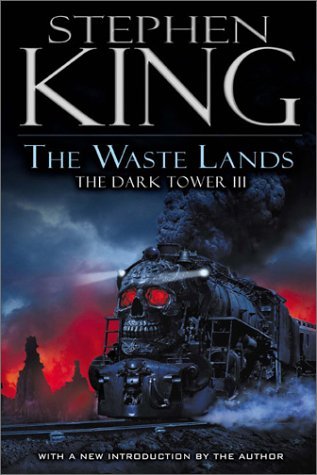 This story, which follows the Gunslinger Roland and his companions on the way to the Dark Tower, is very much a quest story. More coherent than the first volume, and a more conventional fantasy narrative than the second, the most interesting aspects lie in the details of the world. The characters take a familiar journey from A to B through various dangers, but the details of the world are unusual. It’s a mishmash of fantasy, science fiction, western and modern settings, with some horror elements in the mix.

The problem for me lies in the expectation set by the previous two volumes. By comparison with the intense character studies of the The Drawing of the Three, the familiar quest narrative is just OK. Like Robert Kirkman’s Walking Dead comics, this is combining familiar and comfortable structures with more unusual elements, but in a way that doesn’t excite me.

If this had been the first volume I probably would have been excited by the novelty of the setting, and let the quest story carry me through that. But as a third volume it felt disappointing.

I still enjoyed this novel a lot. It may not be great, but it is good.

And King’s ambition here is great. Like the new weird, this combines elements in unexpected ways. Questions are raised about the relationship between the real world and that of the Gunslinger, a relationship which is complex and currently unresolved. We see how people respond when their world falls apart. The disparate genre elements unsettle and excite, promising exhilarating new experiences that they come within a hair’s breadth of delivering.

I read a blog post yesterday in which Jacqui Murray identified an optimistic view of the future as a feature of steampunk. While I’m not sure that optimism is essential to steampunk it is a common feature, a way of making the problems of Victorian society comfortable, shunning the darkness of colonialism and factory labour in favour of bold excitement. Steampunk can explore darker places, and can become more interesting by doing so, but it’s a more risky approach, and so less common.

In the same way, it feels like King has taken the safe route with this volume, and in doing so created something I enjoyed but wasn’t blown away by. I’m hoping for more next time.

Anybody else read this book? What did you think?