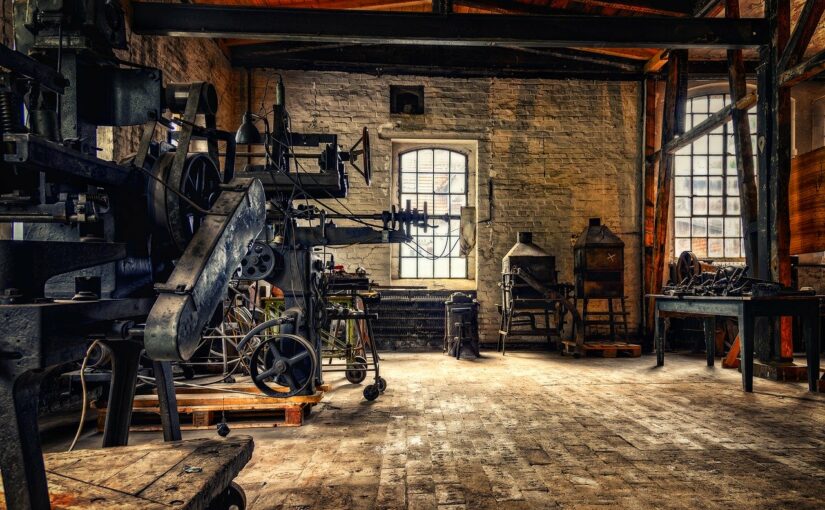 The padlock thudded to the ground, its shackle severed not by my strength but by the magnifying power of the bolt cutter, a gift from the rest of the collective.

Tawana yanked the door back along its rails. I twitched my head like a startled bird, looking for predators that might have heard us, but the rattling roar and its final clang were lost amid the sounds of the city, of innumerable intermeshed machines, their pistons pumping and gears turning to a single rhythm, one beat for a million hearts.

“The authorities aren’t coming,” Tawana said. “They don’t even remember that they took this space from us.”

Her words echoed from the cavernous interior of the engine hall. By the light of our lanterns, I saw row upon row of machines, each one custom made for its own particular purpose; to twist wire, cut gears, mold pistons, or any of a thousand possibilities. They were covered in dust, but when we wiped it away, we saw components preserved under cloth jackets and grease. The operators had cared for their legacy even when forced to walk away.

“This was my grandmother’s machine,” Tawana said, running her fingers over an engraved name plate. “She made clockwork springs for different time signatures.”

There was only one time signature now, the one I could feel pulsing in the floor and up through my feet. The same rhythm I had felt my whole life. It filled us, surrounded us, dictated the pace of our lives from the factory floors to the way we ate our meals. Even now, I walked in time to it.

When I was young, I was enchanted by dance. I learned chainé and chassé, shiori and sashi. I tried different forms and routines, but they never matched the excitement of my imagined dance. They were too fast or too slow, too constant, all tied to that rhythm. Every dance reduced to a single beat.

Tawana pulled a tray out of the base of her grandmother’s machine.

“It’s still here,” she said in an awed whisper.

In the golden pool of lantern light, she laid out a lozenge of brass no larger than a matchbox. With shaking fingers, she turned a key in its side, then let go. Clockwork whirred and tiny levers twitched on the upper surface, moving to a rhythm I had never seen.

I watched, open-mouthed, until it wound down. At my urging, Tawana wound it again. This time I closed my eyes and listened to the clicking of those levers against the case, a fragile and fascinating sound.

The machine next to me had made wire. Thick offcuts lay in a box underneath. I took out a handful of pieces that no-one had touched in a generation, the things our ancestors had meant to recycle. To me, they were artefacts of a golden age. I was at risk of becoming so spellbound by veneration that I never let them become something new.

I picked out four thick pieces of wire, each the length of my hand.

“May I?” I asked, hovering over the clockwork box.

Tawana looked at me as though I had casually asked to dig up a grave. Then she took a deep breath, nodded, and stepped away. Back stiff, arms folded, she watched.

Using the tips of the bolt cutters, I twisted the ends of my four wires into tiny loops, then attached each in turn to one of the clockwork levers. When I was done, I set this simple device down on the concrete floor, the wires becoming slender legs.

Tawana crouched beside me and turned the clockwork’s key. When she let go, our machine began to walk. Its movements were lurching and clumsy, its body wobbling on legs whose lengths didn’t quite match, but it moved to a new beat, one that didn’t join the pace of the city around us, but that gave it a fragile grace.

Laughter rushed through me, as energising as any engine. I leapt to my feet and started to dance, not following the rhythm of our tiny clockwork creation or of the city throbbing all around me, but of something in between, something my own.

This story was inspired by two things – Jeannette Ng’s latest Hugo acceptance speech and the song Bolt Cutter by Doomtree. Now feels like a time when fresh voices are reclaiming the spaces that others forgot they had taken.