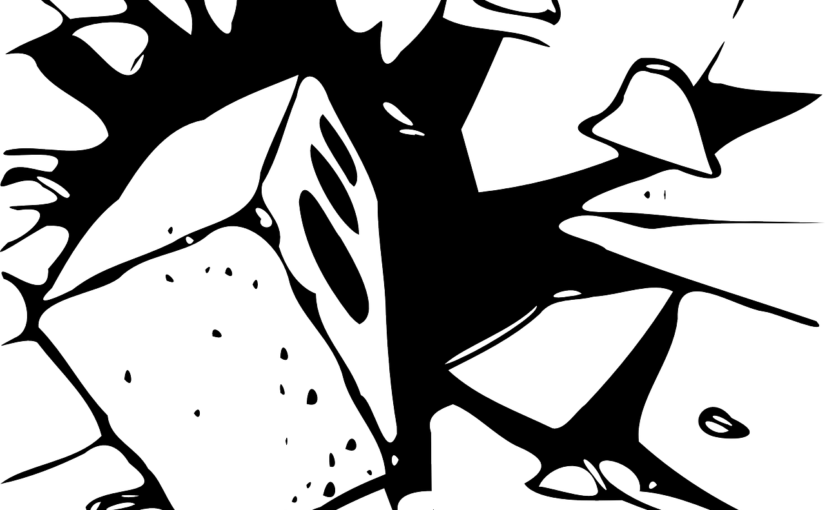 The city roared around Mutt. The sirens, the stamping feet, the chants of two opposing armies of protesters. In the next street over, frustration had just bubbled over into violence, coordinated chants turning into cries of alarm, the crash and thud of projectiles, someone screaming into a megaphone.

While the world was distracted, Mutt flung a brick through the window of a store and stepped in over the broken glass. He walked to the back of the room, where the latest eighty-five inch high definition TV stood in pride of place. The biggest and the best he had ever seen. It was going to be his.

A sound like the popping of a balloon drew Mutt’s attention to the cash register. Two guys were standing there. Both wore baggy pants and hoodies, with bandanas covering the lower halves of their faces, just like Mutt.

Mutt didn’t remember seeing them outside, or hearing anyone following him. But how else could they be here?

“Can we ask you some questions?” one of them asked. He pulled out a phone as thin as a sheet of cardboard and tapped the screen.

“You cops?” Mutt growled, glancing around for something he could hit them with, then deciding it would be better to run. “You gotta tell me if you’re cops. I seen it on TV.”

He nudged his buddy, who started sweeping things off the sales counter and into his bag—pens, mints, fliers, worthless shit. Mutt watched them both warily. They looked kind of nerdy, pale-faced behind their masks, a little squinty, and they talked in that fancy way folks did on east coast TV shows. They didn’t seem quite right, but Mutt wasn’t going to let a couple of freaks get in his way. He started disconnecting the giant TV.

“Which side are you on?” the guy with the phone asked.

“Out there. Are you with the traditionalist-authoritarian movement, or the social equalitarians?”

Mutt didn’t know what those words meant, but he knew where he stood on events in the streets.

“Neither,” he said. “Politics is for idiots.”

He’d got the TV off the wall, but it was bigger than him, and that made it difficult to carry. He stumbled around, one end of the screen resting on the ground as he tried to get a solid grip. There was a flash, and he realised that the guy was pointing his phone at Mutt.

“Hey!” Mutt knocked the phone from the guy’s hand, almost losing his grip on the TV in the process. The phone hit the ground and Mutt stamped on it, but instead of smashing, it bounced back up, like it was made of rubber. “What the hell?”

“Sorry, do you have some objection to being photographed?” the guy asked.

“Do you think it’ll steal your soul?” asked the other guy.

“Don’t be a dick, Lucas,” the photographer snapped, picking up his phone and then turning to the increasingly bewildered Mutt. “He’s new to studying this era, and he got some weird ideas off his old supervisor.”

“Uh, okay…” These guys were creeping Mutt out. It wasn’t just their sharply spoken yet meaningless words. Their clothes caught the light in odd ways, and there were too many stars on the American flag of the first guy’s bandana.

“Tell you what,” the phone guy said, “if we help you with that televiewer, will you answer a couple more questions?”

He had to mean the TV, right? And Mutt was struggling to work out how he could carry it away. This wasn’t an opportunity he wanted to miss—the Superbowl was gonna look amazing on a screen this big.

The two guys took hold of the TV, then one of them turned Mutt around while the other took some elasticated cords out of a shiny black bag.

“Lean forward,” phone guy said. “We’ll strap it to your back. Now tell me, why did you choose this as your artifact to loot?”

“So you weren’t targeting a particular company, its owners or investors?”

“You weren’t trying to make a political statement?”

Mutt laughed. “Politics is for idiots.”

“Shut up, Lucas. My hypothesis could still be correct. We need to gather a broader range of data.”

“You mean you need a new thesis topic. Nobody in twenty-first-century studies will let you get away with this weak shit.”

The TV was firmly strapped to Mutt’s back now. Maybe meeting these guys hadn’t been so bad after all. They were freaks, but they were useful freaks.

“See you around.” Bent over beneath the weight of the TV, Mutt headed for the broken window.

“I doubt it,” camera guy said as a siren approached through the night. Red and blue lights lit up the broken store front.

A black and white car pulled up in the street and two cops leapt out.

“Stop right there!” one of them shouted.

Mutt tried to drop the TV, but it was too firmly tied on, and too heavy for him to run.

“Quick, untie me!” He turned around and found himself alone in the store.

“Hands out where I can see them!” a cop shouted.

Mutt groaned and spread his hands. Where were those freaks when he needed them?

This story is a sequel of sorts. A few months ago, I published a story about time travelling academics studying the destruction of Pompeii. Part of that story involved a time-travelling looter. In response, one of the readers on my mailing list, Vicki Barbosa, suggested writing a story about what happens when time travellers from the future run into modern looters. After letting the idea sit and stew for a while, here’s the result. I hope that you like it.