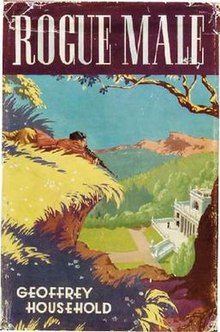 I don’t often read a book in a single day. It happened when I first read The Great Gatsby at the age of seventeen, and it happened this weekend with Rogue Male by Geoffrey Household. That something can keep my attention for that long is high praise in itself, and this book is well worth that attention.

Telling of its Time

Written in 1939, Rogue Male is very much a product of pre-war Europe. An unnamed British hunter finds himself stalking a European dictator, convinced that he doesn’t intend to kill the man, only prove to himself that he could. Caught in the act, he is almost killed and quickly ends up on the run from the dictator’s sinister operatives. Unable to go to any authorities for support, he flees across Europe and then hides out in the English countryside, trying to avoid a violent showdown that bears in upon him with terrible inevitability.

It’s easy for us to forget the perspective of the time, given the moral certainties now attached to our view of Nazi Germany, Fascist Italy and the other far right regimes of that era. There was a tension in the treatment of those regimes by the British and other nations who would end up opposing them. Appalled as many people were by the aggression of Franco, Hitler and Mussolini, the thought of another European-wide industrialised war was also appalling. Individuals as well as nations were deeply torn on which was worse, to act politically and militarily or to accept the consequences of inaction. That tension, and the strained international peace beneath which it sat, sets up the circumstances of Rogue Male, and the hunter’s inability to seek official help. It also runs a thread of tension through the background of events.

In retrospect, the hunter’s struggle also acts as a powerful metaphor for the era. He tries for as long as possible to avoid a confrontation with forces he feels ill prepared to fight, despite his own background of traditional skilled and ritualised violence in the hunt. Yet that potential violence gains a sense of terrible inevitability, like the war that would break out in the same year the book was published.

By modern standards there’s a lot of telling rather than showing in this book. Yet that telling keeps the momentum up, giving the story a feeling of swift movement even at points when the character is going nowhere.

Writing from the hunter’s first person point of view, Household cleverly uses gaps in this telling to create tensions between the hunter’s understanding of himself and our understanding of him, and to show his psychological reactions. The most dramatic and violent incidents are passed over in fleeting moments, their nature revealed by the details of their aftermath. Violence is brief but its consequences endure, and there’s a feeling that the hunter does not want to linger on the thrill of his actions, but rather on the darkness of their consequences. For him, there is no longer any joy in the chase, whether as hunter or prey.

It’s a subtle, powerful form of showing, made all the more so for its limited deployment in the book.

The Power of Perspective

That restricted perspective is also used to explore the hunter’s motives. Because of the way that the story is told, he can plausibly hold back on this – not deliberately, but because of what he himself does not want to think about. As the truth is gradually revealed, it adds an extra sense of dread and tension. The revelation of the past gains the same terrible inevitability as the future.

This book isn’t going to be for everyone. It’s outside of my usual science fiction and fantasy reading, and I doubt I would have read it if my mum hadn’t given me a copy. But even if thrillers aren’t usually your thing, I recommend giving it a go. It’s dark, powerful, and strangely fascinating.