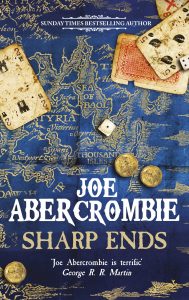 Some writers have a reputation that doesn’t quite fit their style. One aspect of the work gets exaggerated, especially in the eyes of those ill-acquainted with their writing. In my mind, one of those is Joe Abercrombie.

Don’t get me wrong, Abercrombie is no victim of misrepresentation here. Having embraced the title of Lord Grimdark, and the twitter handle to match it, he’s become the figurehead for a particularly dark style of fantasy. It’s a gritty, muscular, action-packed sort of darkness, rather than the angst of goths, vampire novels, and urban fantasy. But I imagine that the very label “grimdark” puts some people off.

Yet there’s a wonderful humour to Abercrombie’s work. Reading his short story collection Sharp Ends has reminded me of this. Little details, from thugs discussing architecture to one-liners in fights, round out the world and its characters. As a reader, I’m never left drowning beneath the sea of sorrow that “grim” and “dark” imply. This is all about the black humour.

It shouldn’t be a surprise. The phrase “grimdark” originally applied to Games Workshop’s Warhammer 40,000 universe, whose catchphrase referred to the “grim darkness” of the future. Like Abercrombie, GW created a setting of darkness so exaggerated it can sometimes become cartoonish. Humour and hideousness are inseparably intertwined. Characters and places become over-the-top in an entertaining way. The pleasure of reading them comes from smiling at the absurd side even as you prepare for a serious moment to follow.

Like the spaghetti westerns he paid tribute to in Red Country, Abercrombie creates stories that are somehow both grounded and mythologising, humourous and serious. Their very existence undermines the false divides we try to set between these things, splitting our world into black and white. It’s damn fine stuff, to which I find myself returning over and again.

But then, what should we expect from such a self-mocking title as Lord Grimdark?