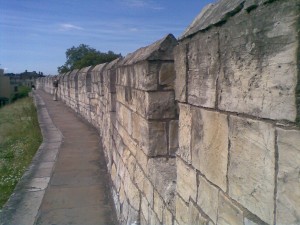 Desperate hunger filled Marcel’s belly. It gnawed at the corners of his mind, dragging his attention away from the scribing tasks his master had given him. Being able to read, write and understand five languages, these were useful skills for a peacetime merchant’s apprentice. They were near useless in a town under siege, with no trade to be had and no food left to buy.

He set aside his quill. Master Pierre had fallen asleep again. The time had come to leave his work and go in search of food.

It was a quick walk from the marketplace to the walls. The streets were quiet, people staying indoors during the English bombardment. Most of the stones hit the town walls, but some fell inside, and flying splinters of broken building could be as deadly as a direct hit.

Reaching the walls, Marcel glanced up. His brother Jean was on guard, almost looking like a soldier in his chainmail. Marcel whistled and Jean winked down at him.

He slid into the narrow gap between a stinking tannery and the walls. There, hidden inside a heap of old masonry, was a narrow tunnel. The end outside town lay concealed behind a stand of blackberry bushes, known only to the two brothers.

Fast as an eel, Marcel slid through the gap and emerged into the bramble patch. The berries hadn’t ripened yet, and he would need to go further abroad to find food.

Keeping a wary eye on the distant English camp, Marcel scrambled low across a muddy field, scurried along behind a hedge, and emerged into a wood half a mile outside of town. Apples hung from the higher branches of the trees, untouched by the besiegers.

Marcel would go a long way for an apple. Without pause, he clambered up the nearest tree.

From among those high branches, he heard a voice below.

“Get down here, you little bastard.” The man spoke French, but with an ugly English accent. He had a bow pointed at Marcel, an arrow drawn on the taught string.

Trembling with fear, Marcel descended. His mind was full of the terrible things he had heard about the English. The towns they had burned, the people they had killed, the fact that they had tails hidden under their tunics like demons in disguise.

There were a dozen men in the woods, all armoured and armed with swords and bows. The leader grabbed Marcel by the throat and shoved him against a tree, bark clawing at his back.

“I saw you scurrying from beneath the walls.” He drew a knife and held it beneath Marcel’s nose. “You’ve got some secret way into town, don’t you?”

The soldier pressed the dagger against his cheek, drawing blood. “Tell me, you French prick, or I’ll have your eyes out.”

Marcel swallowed. He had no desire to betray the town, but what could he do? At least this way the siege would soon be over, and they could eat again.

“This way,” he whispered.

The soldier kept a hand on Marcel’s shoulder and a knife at his back as they crept across the fields toward the tangled bramble patch. The soldiers whispered to each other on the way. They had changed to English, but Marcel understood the language all too well.

“Hal, get back to camp,” the leader hissed. “Once we’re inside we’ll storm the gate and get it open. I want the rest of the boys there before these frog wankers have a chance to fight back.”

“And then?” one of the men asked excitedly.

“Then take what we want and burn the place to the ground.” The leader shoved Marcel forward. “These people said no to King Harry. Lessons have to be learnt.”

Marcel’s stomach lurched. He wasn’t going to survive this, and neither was anyone else he knew. It crossed his mind to throw himself back onto the blade, guarding the tunnel’s secret with his death. But he hadn’t the courage for that.

Instead, as they crept closer to the walls, he began to cough loudly.

“Shut up.” The soldier hit him across the back of the head. As he fell in the mud, Marcel looked up and caught a glimpse of Jean’s face. For a moment his brother was there between the battlements, then he was gone.

Faking a limp, Marcel rose and walked as slowly as he dared toward the walls. Fear still shook him, but there was pride too. The defenders would have time before these men got through the hole. Maybe long enough to kill them as they emerged, one by one, from the tunnel. Surely long enough to stop them storming the gate.

As he pulled back the bushes and led them into the darkness beyond, the unexpected thrill of adventure ran through Marcel.

But his belly still rumbled.

If you liked this story then you might enjoy my collection of historical and alternate history stories, From a Foreign Shore, only 99c on Amazon Kindle.

The ditch below the town walls was a dense stew of mud and blood. The remains of the fallen protruded from the filthy mass of wet straw which bridged the gap – pale fingers outstretched as if digging their way out of Hell. Sir Richard de Motley couldn’t remember the name of the town – something unpronounceably French – but he was determined that those men’s sacrifice should not be in vain.

“Onward!” He charged gloriously toward the wall, shield in one hand, one end of a ladder in the other. Arrows whistled down around him and the small band of brave men who had chosen, despite the caution of their commanders, to follow him in his assault.

“Bad idea.” Adam, Sir Richard’s squire, helped him raise his ladder, one end sinking into the mud, the other resting against the battlements above their heads. “This is all a terrible idea.”

As more ladders were raised, the first of the men fell, skewered by arrows or struck down by rocks. Sir Richard raised his shield to protect his head and began climbing as fast as any man could while wearing chainmail.

Amid the screams and thuds of falling bodies, Sir Richard heard a clang and a curse as a crossbow bolt skimmed Adam’s pot helmet.

“Can’t we come up with something smarter?” the squire pleaded. “I know you like charging in, but-“

Sir Richard ignored him and leapt over the battlements, knocking a Frenchman from the wall as he landed. He drew his sword and parried a blow, then began to advance along the wall, cutting down his enemies while more followers reached the battlements behind him.

Now that he was up here he could see defenders in the streets below, hurrying toward them from the fighting on the far side of town. Soon his band would be completely outnumbered – a perfect opportunity for great deeds of heroism.

“To the citadel!” he exclaimed, pointing toward the fortress at the heart of town.

Two English soldiers fell from the walls as arrows rained down. The men were not following him toward the enemy with the eagerness he had expected. What was the matter with them?

“Perhaps the gatehouse?” Adam pointed toward a pair of towers two hundred yards along the wall. “We could let the rest of the army in.”

“And give them all the glory?” Sir Richard scoffed.

“And ensure that they owe you every one of their victories.” Adam was glancing around anxiously, fingers white around his halberd.

Sir Richard thought of the whole army cheering his name.

“To the gatehouse!” He turned and charged back along the wall.

With enthusiastic cries the men followed him, archers pausing to provide cover as they left behind mass of enemies now ascending the walls.

The door to the gatehouse was solid and bolted from within. It held firm as Sir Richard slammed his shoulder against it. Rocks again fell upon him and his men – less men than he remembered – and the floor was slick with blood. Boiling oil hit the man beside him, who stumbled screaming and fell from the battlements.

“This is…” Sir Richard didn’t have a word for what he was feeling. It was cold and heavy in his stomach, and drained away the thoughts of glory that had spurred him on.

“Terrifying?” Adam’s halberd was covered in blood, as was his face. It was impossible to tell how much was his.

But fear was not for Sir Richard. Of that much he was sure, no matter what this feeling was.

With a great cry, the enemy soldiers charged toward them along the wall, and Sir Richard felt his spirits rise again. A blocked door was a hindrance, but war, war was glorious.

“Huzzah!” He rushed past his men and met the enemy head on. He hacked one man’s head from his body, knocked another off the wall with his shield, ran the third one through. Faced with his sudden, furious onslaught, and with no way around him, the enemy hesitated.

Sir Richard grinned, passed his shield to Adam and grabbed a two-handed mallet dropped by one of the enemy. As both sides stood uncertain, he raced back along the wall, swinging the mallet with all his might.

The gatehouse door gave way beneath the blow, flying back with an almighty crash. The two men inside took one look at the furiously grinning and blood-soaked Sir Richard. Then they ran, leaving the windlass that operated the gates unattended.

“Adam!” Sir Richard bellowed, turning to rejoin the fighting on the walls. “Open the gates.”

“Yes, Sir Richard!” Emerging from the melee with unseemly haste, Adam set to the mechanism.

Shield and sword once again filling his hands with their familiar shape, Sir Richard marched out onto the balcony, through pools of blood and across scattered bodies.

If you enjoyed this, you can read more of the adventures of Sir Richard de Motley in my collection of short stories, By Sword, Stave or Stylus, in which the bold knight faces a strange cult, a flock of sheep, monsters lurking in the French forest, and the disdain of many smarter men. And if you enjoy any of these Friday flash stories, do please share them with your friends.