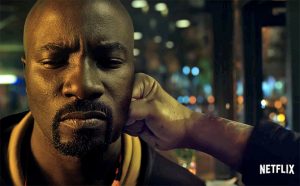 Druglords. Corrupt politicians. Media attention. People fighting for justice amid poor African-American communities. Luke Cage, the third TV collaboration between Marvel and Netflix, tries to match superhero action to the social issues addressed by shows like The Wire. It’s a tough trick to try. So does it work?

After two seasons of Daredevil and one of Jessica Jones, we know what to expect from a Marel and Netflix street superhero show. Daft superpowers presented as realistically as possible. References to the Avengers and how weird they make the world. A good cast. Brooding visuals. At least one stylish fight in a corridor.

Luke Cage has all of that.

The cast range from good but under-used to absolutely splendid. Rosario Dawson and Simone Missick own the show as Claire and Misty, and praise be to Netflix for making Claire the thread that connects these shows together. Alfre Woodard makes a nuanced and compelling villain. Mahershala Ali reminds us that he was the best thing in The 4400. Theo Rossi doesn’t get to show the emotional depths he did in Sons of Anarchy, but shines when he gets to show his crazy intense side. Mike Colter is powerful and charismatic, though I still thought he had an extra allure playing a drug kingpin in The Woodwife.

The question of how superpowered people affect the world, and how the world responds to that, is addressed in the plot – an important thing to do in grounding these shows. The social drama of Harlem shines through in the early episodes, and Luke’s place in that is interesting. It’s clear who’s a hero and who’s a villain, but that doesn’t mean that the villains are flat objects of evil.

The problem comes with the different tones this show is trying to balance.

On the one hand, there’s the attempt to show a more straight-up hero story than in the previous shows. Luke Cage is a good guy who wins by standing up for the little guy and wielding his fists. The baddies prey on ordinary people. Cage doesn’t swear and he says cheesy things, even getting called on it by the people around him. There’s a little bit of goofiness going on here. It sometimes goes too far. Yes, people should be cheering this guy in the street. But the show’s so insistent on showing that, it sometimes interrupts the tone of the drama or prevents people behaving realistically. It’s like that time they flew the American flag in a Spiderman movie and all the people cheered for him on Brooklyn bridge – nice idea, but gone too far.

This becomes more glaring when it’s matched with the gritty issues the story touches on. Are gangsters any worse than politicians? What price should a community be willing to pay to pull itself out of poverty? Can you act outside the law and still be in the right? If so, who judges what is right? How far are we responsible for our families? Like Jessica Jones, this show draws a lot of its drama from the way one part of humanity has been disadvantaged. Unlike Jessica Jones, it fumbles the issue, rolling off into more familiar and less interesting terrain. At times, it almost feels like it’s falling into the orientalist trap, nodding towards touchstone of African-American culture so hard that they become an othered curiosity, looked at from the outside.

A Worthy Addition, But Not a Great One

Luke Cage is well worth watching if you like superhero shows. It’s got interesting plot twists, some strong characters, and some fantastic acting. There are fun action scenes, including the inevitable corridor one. The stuff that doesn’t quite work is well-intentioned. It’s probably the weakest Netflix/Marvel show so far, but anything was going to look wobbly next to the focused burst of drama that was Jessica Jones.

I’m sure we’ll see more of this show after its lead has crossed over into The Defenders. I hope it’s found its feet a little better by the. And if not, the lesson to learn is that even the least impressive Marvel/Netflix show is still quality TV.