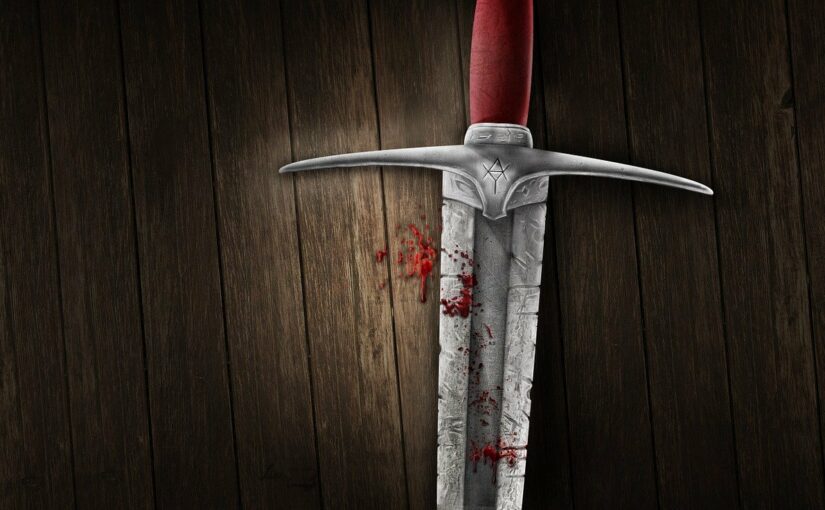 Hugh walked into the smithy and slammed a sword down on the anvil.

“Sharpen it for me.”

A warm summer wind blew in through the door, stirring the flames in the fire of the forge. Steam hissed from a bucket as Hugh’s Uncle David plunged a horseshoe into water, then set his work aside.

“Where did you find this, lad?” David picked the sword up with his right hand, then ran the remaining fingers of his left hand down the rust-blotched flat of the blade.

“Hidden in the rafters. It was my father’s.”

“Oh, I know whose it was.” David set the sword down carefully. “I made a matching pair for your father and me, before we went to war.”

It was one of Hugh’s first memories, the two most important men in his life marching away like warrior saints, sunlight gleaming off their spear tips. The return had been bleak, Uncle David alone, crusted bandages around his hand, Hugh’s mother crying while David talked about a battle at a place called Barnet.

“Maybe.” David scooped sand from a bucket with a rough cloth. “I’ll clean the rust off first, then get to sharpening. If you’re sure you want to fight.”

“Of course I want to fight! And what do you mean maybe?”

“Why are you fixing my father’s sword, if you don’t believe in me?”

“You shouldn’t go to fight because you think you’ll win, lad.”

“No. We went to fight because the cause was just. Wanting to win and expecting it are very different. One drives you to do better, the other blinds you to the truth.”

“Liar! My father thought he would win, otherwise why would he leave us like that?”

“Because we wanted to mend a broken country. And because we were fools.”

“Maybe, but I’ll still sharpen your blade, if you think you should go fight.”

“You don’t deserve to touch this.” Hugh clutched the sword close.

A terrible stillness fell across the smithy. No wind blew through the door. The flames in the forge dwindled. Hugh’s uncle stared at him, face set like a carving on the wall of the church.

David held up his hand, both fingers and thumb extended.

“Maybe you don’t deserve that sword, boy, if you can’t face the real world the way your father did. If you can’t accept its pain and cruelty. If the only cause you’ll fight for is a cause that’s already won.

“I fought because the right side might lose, and that doesn’t stop it being right. If you can’t fight that way, then you’re the one who doesn’t deserve the sword I made.”

Hugh trembled. “My father wouldn’t have deserted us.”

David sighed. His shoulders slumped. He stepped around the anvil, and Hugh stepped back, but instead of reaching for the sword, David sat on the anvil, and all the strength seemed to fade out of him.

“Your father thought that it was more important that you grow up in a good country than that you grow up with a father, though he wanted you to have both, and if I’d been quicker with my spear then he might have got part of his way. I’m not saying he made the right choice. I’m saying that, if you’re going to leave your mother all alone, you should do it for a good reason. People die on both sides, and dying because you think you’ll win is dying for no reason at all.”

In his uncle’s face, Hugh saw grief weigh as heavy as the iron chains he forged. Anger, the last bulwark of certainty, shattered in the face of long-held loss. Would he make his mother go through this again, when she was finally smiling?

“I don’t know if we’ll win,” Hugh confessed. “And I don’t know if it’s the right cause. I need to think.” He offered up the sword. “Can you sharpen my father’s sword for me, while I decide?”

“Aye, lad.” David took the weapon with a sad smile. “Let me do that for both of us.”

I have a new Commando comic out this week, “Brothers in Arms”, and like this story it’s set during the Wars of the Roses. it follows two brothers who end up on opposite sides of the fighting, and their journey to one of the decisive battles of the Middle Ages. You can buy it digitally through Comixology, or as part of a bundle of issues through the publisher’s store.

My trusty blade – a souvenir from Stabcon, my local board games convention. It seemed particularly apt, given my work.

One of the most exciting panels at FantasyCon, and one with a very eager audience, was ‘The Pen vs the Sword’, on combat in fantasy fiction. On this panel were…

I’ll try writing this one up as bullet points, see if I get more in than with my last panel writer-up.

Fighting in its social and historical context

Other odds and ends

The panellists did a demo afterwards, which I missed, but here’s a video someone else took of it:

This panel contained a lot of practically useful information on writing fights in fantasy and historical fiction. Anyone have any other guidance on this, or good sources to check out?