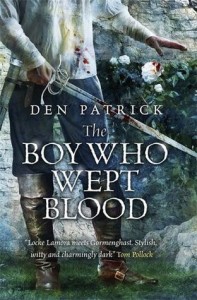 It’s a great pleasure when a sequel is better than its predecessor. Sometimes that comes from the ability to build upon the previous story, adding depth and saving time on exposition. Sometimes it comes from a writer improving their craft. In The Boy Who Wept Blood, the second book in Den Patrick’s Erebus Sequence, it seems to come from both.

The Boy Who Wept Blood picks up ten years after where The Boy With the Porcelain Blade left off. Much has changed in Landfall, a fantasy world with an implied science fiction backstory. Much has stayed the same. The noble families of Demesne are still plotting against each other in a series of arcane intrigues. The Orfani, unusual offspring of this gothic palace’s past, are still the tools, targets, and victims of the schemes. Social divisions continue to plague society.

Yet the events of the previous book have brought a wave of change – political, social and religious. Trying to protect the people he loves, master swordsman Dino attempts to ride out the slow building tsunami. Caught in a web of manipulations and lies, he risks being used by those causing the problem. Can he take control and save the situation, or will he be swept away by it?

The questions of class prevalent in the first book return, joined by a new emphasis on sexuality. This isn’t to say that the book is full of steamy scenes, but rather that it explores how rules restricting human sexuality can mess people up. Characters struggle with love in a world of political marriages, with being gay in a homophobic society, with understanding their own desires when people’s actions and their intentions seldom match and social pressures prevent them from even thinking the truth. This is beautifully executed, using power, subtlety, and an idealism that still acknowledges how unpleasant the world can be. It’s fantasy exploring the real problems of society, not just escaping them, and that’s something I like.

The story doesn’t stop for these big questions but weaves them into its tapestry. There are plots and fights and all that adventure. But if you want to stop and think, there’s something of substance too.