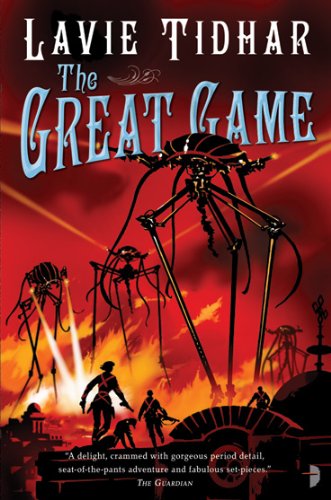 Steampunk is a curious and often inconsistent thing, particularly when it’s the steampunk of Lavie Tidhar. I worked my way with interest through the oddity that was The Bookman. I read its sequel Camera Obscura with great excitement. And so at last I came to the final volume, The Great Game, eager to find out whether it would live up to its title.

The Great Game is a story of spycraft and intrigue set in Tidhar’s Bookman world, a 19th century alternate history with lizard monarchs, alien devices and literary characters roaming the streets. That name – the Bookman – draws attention to the sort of characters we’re dealing with here – literary borrowings such as Mycroft Holmes and Victor Frankenstein, as well as archetypes such as The Bookman‘s Orphan and this volume’s retired secret agent Smith.

Despite their well worn familiarity, those characters are one of the absolute highlights of this book. In particular, the reluctantly re-activated Smith and current agent Lucy are vivid, well depicted characters who I found good company and excellent drivers for their strands of the story. They’re clever and determined, pressing on through the confusion and overwhelming odds of their circumstances. Though Camera Obscura‘s Milady remains my favourite protagonist from this series, these are good, and certainly better than Orphan, who as Dial H for Houston pointed out, suffered from passivity and dullness.

Smith and Lucy’s paths, and those of the other characters, take them through a journey that’s one part John le Carré tension, one part Bond-style action, and one part batshit crazy. That weird and wonderful world is a big part of the appeal of this series, and it plays off here in spectacular style. The spies are doubly spy-like, the crazy ten times what it was, creating a sense that both the characters and the story could be overwhelmed at any moment.

Therein lies both the beauty and the problem of this book. I know others have found this plot chaotic, though I thought it cleverly intertwined rather than rambling like the first book. But it definitely lacks coherence in places, most critically the ending. Without giving the great game away, I felt that the ending lacked the sort of closure a thousand page series left me wanting, while not giving me enough to instead ponder the possibilities of what would come next.

Look at the book’s cover, the version I’ve used in this post. Isn’t it bold? Isn’t it dynamic? Doesn’t it fill you with a desire for retro, pulpy, genre-mashing action? That’s what I wanted, even expected at first, from these books, and it’s an expectation they didn’t deliver on. They’re fascinating but flawed, far stronger in their ideas than their narrative cohesion, the bit players often more intriguing than the protagonists.

I’m glad I read this series, and that I saw it through to the end. These are good books. I’d even go so far as to call Camera Obscura great. But they don’t deliver on what they seem to promise, and that, for me, was their downfall.

For me as a writer, it’s also a very important lesson. Make sure your book does what it promises to, or you’ll have some disappointed readers.