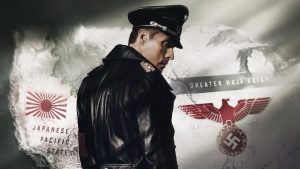 The Man in the High Castle is a gripping piece of television. It takes the ideas laid out in Phillip K Dick’s book and expands upon them to create something powerful and fascinating. More than this, it’s an exploration of morality and of why the Second World War is still so powerful in all our imaginations.

The Man in the High Castle is a rarity. It’s an alternate history story that, both in its original novel and in the TV show, has reached beyond that small cultural niche and found a wider audience. Both versions have received popular and critical acclaim.

A huge part of its success lies in the choice of historical settings. The Second World War lies heavy in historical memory. For the generation before mine, it still had a great immediacy. In Europe, they grew up amid the rubble and rebuilding efforts. Across the world, they grew up with the consequences and with the war stories of their parents’ generation. As a result, the war also felt immediate for the generation that followed – my own. It was a modern event that shaped the modern world.

The scale and impact of the war are also factors. The term “World War” is a little misleading, given the number of countries that weren’t involved. But it was still a war on an unprecedented scale in the number of nations and combatants, as well as the sheer destruction. Millions died both in combat and in atrocities against civilians. The political and cultural landscape of entire continents was transformed in the space of a decade.

Perhaps most powerfully, it is a war where the sense of moral right and wrong has lingered. While all sides committed terrible acts and every nation had figures striving for good, a distinction remains. The Nazis and their allies sought to enforce their will upon others through violence. They tried to wipe out entire groups of people because of who they were. The Allies fought against that.

Trying to assert a sense of right and wrong upon history is usually misguided at best. But in this case, nothing has shaken off the sense of being in the right that the Allied nations retain.

Playing into Our Vision of WW2

The Man in the High Castle plays into this collective vision. It uses our understanding of the war and how significant it is. This is an easy shortcut to show us that the alternate world is very different and far darker.

By sticking inside the 20th century, it retains that sense of immediacy. Sure, its 1960s setting is now decades behind us. But it’s still modern enough to feel achingly familiar, painfully so when things are wrong.

Most powerfully, it plays up the moral aspect. The horrifying nature of Nazi moral values is there from the start. Characters have taken part in and borne witness to atrocities. Political murder and oppression are common. Aberrations against what the Nazis consider normal, even those as innocent as ill health, are dangerous.

On the Pacific coast too, continued Japanese militarism creates a menacing state with clear racial distinctions.

But what makes The Man in the High Castle so powerful is that it questions and undermines these certainties.

Partly, this is about the significance of the war. Within the story, films of alternate realities create questions about the world the characters live in and by extension our own. If there are many other possible realities, is any one event really so significant? Don’t other events equally shape our lives? If the Axis powers had won, would the war still be the single most significant event, or would others that followed match it?

Most tellingly, The Man in the High Castle challenges our moral certainties.

By dropping the atomic bomb on Washington, it forces us to face the terrible nature of the things the Allies did to win the war. The Nazi leadership may have been villains, but can the other side still be considered heroes after wiping out entire cities?

By showing us sympathetic characters on the German and Japanese sides, it undercuts the image of these regimes as all bad. It reminds us that ordinary people can do terrible things if society leads them that way. The question for anyone watching then becomes “in what ways is society leading me to harm others while seeing myself as right?”

Darkest of all, the story undermines the image of those resisting the Axis powers as good. Resistance fighters do desperate and terrible things in the name of freedom. At times, they become antagonists to the show’s hero. They go so far that it’s hard not question whether anyone is in the right here. There are different degrees of wrong and the Nazis are clearly far more hideous in their values than anyone else. But still, the certainties fade…

The Man in the High Castle uses a powerful part of our historical memory to raise powerful questions. To do right, we have to be able to act. We cannot be frozen by doubt. But we still need those doubts, to be able to see when we might be wrong and to adjust our path.

This is a show that should help us to approach morality more intelligently and to examine the past more critically.