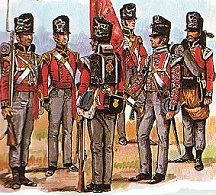 The arguments started on the way back from the funeral.

“I should get Bessy’s place,” Sally Ambrose hissed. “My James has been in the company longest.”

“You only married a month ago,” Alice Sharp snapped. “I’ve been waiting all year.”

I kept quiet. Bessy Jones had always been kind, and I didn’t have the heart to fight when she was barely in the ground.

Of a hundred men in the company, sixty-eight had wives. Only six of those women got to live in the barracks, and so would sail overseas with their men when they went to fight Napoleon. In two days time, the rest of us would be left behind, penniless and homeless, desperately hoping that some part of our husbands’ pay would get home. Being one of those six could be the difference between comfort and starvation, not just for me but for little Jane and Billy.

But Bessy was barely even cold.

Her words were cut off by a violent sneeze.

As we approached the barracks, men broke off from the column, waiting to speak with their wives before they got back to work. Hugh was among them.

He wrapped his arms around me and for a moment my cares melted away. We watched Jane and Billy chase up and down the road, waving sticks as they played at soldiers.

“It’s the place in the barracks,” I said. “I just wish there was a way it could be mine.”

“Would you really want to come to Spain with us?” he asked. “I mean, there’s the war, and all the marching, and…”

“Better that than be left behind.” I tried to keep my tears from staining his red coat.

“The captain likes me,” he said. “I could ask, if you really think it’s best.”

I thought of our children growing up without their father or a penny to get by on.

Hugh found me out by the barn, where couples met to spend time by themselves. I’d left the children in Alice’s care. Whatever happened, I wanted Hugh to myself one last time, before they all took ship for Spain.

I could read the captain’s answer in the slump of his shoulders.

“Sally Ambrose got the barracks spot,” he said. “James has seniority. Captain Walters was kind, but he’d already made up his mind.”

I swallowed my tears and led Hugh up into the hay loft. Knowing he would be gone made me burn for him all the more now, despite the sorrow heavy in my heart.

Later, as we lay tangled in the straw, we talked about that barracks space, about what it would be like to sail off to war with the children.

“It’s for the best, really,” I said at last, feeling a burden lift from me. “War’s no place for children. I can find some work washing or mending, until your pay comes home.”

We both knew women who had been where I was now. We both knew what the promise of that money was worth. But it would give me the hope to endure whatever small, demeaning jobs I could find.

We both knew what that was worth as well, when a man marched off to fight. But I clutched him closer all the same. I’d accepted my fate. That made it easier somehow.

“Ada?” A shout from down in the barn interrupted my reverie. I hastily pulled on my dress and went to see who it was.

Alice stood at the bottom of the ladder, holding Jane and Billy’s hands. Her face was pale.

“Sally’s sick,” she said. “Fever and fits. I thought I’d best get the children away.”

I looked at Hugh, and I could see the question in his eyes. If he got in quick with the captain now, maybe that barracks place could be mine.

Sally wasn’t even dead yet. Was I willing to start the fight?

I looked at my children and then back at Hugh.

I nodded. I wanted to be that sixth wife.

This whole thing with six wives to a company was a real and heartbreaking part of life in the British army in the Napoleonic era. Life in a barracks or on the march wasn’t great for a wife and children, but being left out was even worse. Because it was so hard for women to find work, families were left destitute while husbands and fathers went away to fight. And because we focus so much on the action of war, this important aspect is often forgotten.