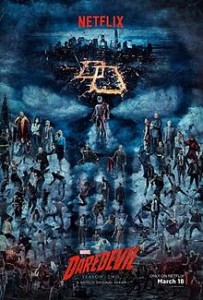 I recently watched the new run of the Netflix/Marvel TV show Daredevil. Better people than I will offer coherent reviews, but I had a lot of thoughts about this show, and wanted to get them out of my system.

While I’ve tried to stay vague about details, there are spoilers ahead. You’ve been warned…

When I heard that Marvel and Netflix were putting the Punisher into the second season of Daredevil I was worried. I understand the appeal of the Punisher, Marvel’s gun-toting vigilante anti-hero, but I didn’t think that his vengeful brutality would work well here. I was very, very wrong.

Punisher is the best thing about this season. The storyline around him explores the morality both of his actions and of Daredevil’s. It’s the most convincing and nuanced exploration of the character I’ve seen, made more powerful by Jon Bernthal’s compelling performance.

I really can’t emphasise this enough. It seems like we’re meant to like Murdock, aka Daredevil, empathising with his guilt-ridden Catholic ways and his need to take responsibility for everything around him. But the more I watch, the more I find his attitude rotten and egotistical. His constant references to “my city” and his insistence on him being the one to solve everything aren’t the attitude of a man taking reasonable responsibility – they’re the attitude of a man claiming ownership over the people around him. It’s not noble, it’s selfish, and he’d be far more effective if he worked with others. In his own way, he’s as unreasonable as the protagonists of Sons of Anarchy, and as with those characters, I empathise right up to the moment I think about what he’s saying and doing.

I can’t tell whether this is a deliberate move by a very clever show, or a terrible reflection of what is considered appropriate behaviour for a man and a hero. Given the Punisher plotline, I’d be inclined to give the show the benefit of the doubt, but…

There’s an interesting conversation to be had about who the antagonist of this story is, but one thing’s for sure – there’s no interesting central villain. The Kingpin was a highlight of the first season, turning it from something good to something utterly compelling. Here he’s a bit player, and there’s no equivalent figure to take his place. The Punisher, though well written and performed, is sidelined in the second half of the season, and there’s no other figure as interesting. The eventual villains are dull and passionless. It’s a real shame, as the makers of this show have shown that they can do better.

Karen Page was a problem in the first season, a bit too much the blonde girlfriend / victim. The hints of darker things in her past weren’t enough to avoid the feeling that we were heading into terrible gendered tropes. This season she does better, emerging as a more strongly written and pro-active character, whose failings make her interesting rather than disappointing.

Will Claire Temple Bring the Defenders Together?

This point is wishful thinking on my part, but plausible at this point. Claire Temple, the nurse who helps out superheroes, is currently the strongest connecting thread between Daredevil, Jessica Jones and, through her existing relationship with the protagonist, possibly the upcoming Luke Cage series. Could she be the one to bring together these heroes and the as-yet-unseen Iron Fist for the eventual Defenders show?

I really hope so. Of all the characters we’ve seen in DD and JJ, Claire is the one I most admire as a person. She’s strong but not obstinate, caring but not a pushover, and Rosario Dawson never puts a foot wrong with her performance. As the person who picks up the pieces of the broken superheroes, and who calls them on their bullshit, Claire would make a wonderful central point and moral compass for the ensemble show.

Daredevil‘s two seasons have given us origin stories – one for Daredevil, the other for Punisher. In both cases, the character dons their costume at the end of that origin story, symbolising their new status as a superhero.

But I think there’s something else at stake here. In donning a costume they’re marking themselves as separate from the rest of humanity. Such costumes, like medieval full body armour and modern matching military uniforms, dehumanise the wearer, making it psychologically easier for them to perpetrate acts of violence against others, and to have those acts perpetrated against them.

In the context of the MCU’s gritty street hero shows, this feels particularly important. It fits with the moral decline and isolation we see in Daredevil, Electra and the Punisher. When they put on costumes, they set aside their humanity to take up the fight. The fact that Jessica Jones and Luke Cage haven’t done so is fitting, given that they’re more in touch with their humanity and other people.

This may be me reading my own interests into the show, rather than the intention of the show runners, but then stories only become complete in the minds of the audience.

The Terror of Blood Trails

Ever since watching The Untouchables in my youth, wide blood trails left by crawling characters have always filled me with dread. Every time I see them I feel the tension of the scene where assassins come after Sean Connery’s character, which at the time was one of the grittiest, tensest things I’d ever seen. I still think there’s something powerful and horrible about a messy blood trail left by an injured character crawling. Their pain is written across the ground in a way you don’t get with blood spatters. When I saw that in this show, it hit me harder than any other moment of violence.

The Slow Build of the Weird

The creators of Daredevil are being careful in the way they bring in strange and supernatural elements, building them ever so slowly out of the mundane. It’s a technique I’ve noticed in horror, in both David Tallerman and V H Leslie’s stories. It makes the implausible more plausible. It works well here.

One of the unfortunate aspects of Daredevil is that it reflects the west’s longstanding attitude towards Asia, and in particular east Asia, as a land of the exotic and dangerous. This season is rammed full of shallowly written oriental villains, without sympathetic characters of Asian descent on the other side. In isolation this would not be a problem, but in the context of modern culture it perpetuates a trope that’s very troubling when people are pointing with growing fear at Iran, North Korea and China. If, as some people hoped, Iron Fist had been cast as an Asian character, then the MCU’s street character team could have balanced this out. As it is, it left a slightly unpleasant taste in the mouth.

Even a flawed Netflix Marvel show is still a superior superhero show. Daredevil isn’t as brilliant as Jessica Jones, but it’s still a good show, worth your time if you like superheroes or gritty drama. I just hope they pull their socks up for the next season, because season two could have been amazing, and instead it became sloppy.